Girl, 16, who hopes to join army made Mayor’s cadet 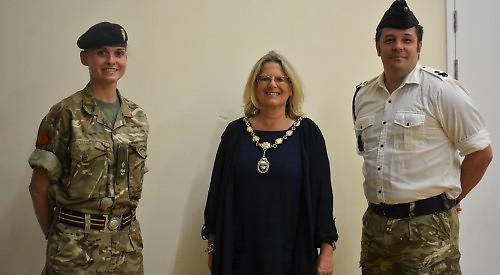 A TEENAGER who hopes to join the army has been selected as the Mayor of Henley’s cadet.

Lance Corporal Grace Iveson is a member of the Henley Army Cadets and was chosen by her detachment commander, 2Lt Mel Haynes.

The role involves supporting the Mayor Councillor Sarah Miller at formal events such as the Remembrance Sunday service.

Grace, 16, lives in Deanfield Avenue, Henley, with her mother Paula and brother, George, 13. Her father Matt lives in Twyford.

She will begin studying for
A-levels in politics, law and English language at The Henley College this month after leaving Piggott School in Wargrave.

“I’m planning to do international relations at university,” she said. “I intend to join the Intelligence Corps.

“If I get the experience from the army, hopefully it will set me up for another career afterwards.”

About 20 cadets took part in the inspection at the Drill Hall in Friday Street, which was carried out by 2Lt Haynes and area commander Major Wayne Thrussell.

They then divided into groups to demonstrate the skills they had learned.

Grace, who was presented with a certificate and badge to mark her achievement, was one of seven cadets to be interviewed for the role.

She said: “I’m good in interviews so I enjoyed it and I took it as an opportunity to learn, even if I didn’t get it. I would like to say thank you to my detachment commander and company commander. We are the best detachment of the best company and that couldn’t happen without them and all the adult volunteers.

“Cadets is so incredible — it is the best part of my week. The people are incredible, both the instructors and the other cadets.”

The Henley detachment is one of five that make up the Nivelle Company in South Oxfordshire and normally has 35 to 50 young people attend the weekly meetings.

Children normally join when they are 12 but Grace didn’t do so until she was 14. She was inspired by her cousin, Amelia Jacob.

She said: “My cousin is also in the cadets and she got into it after she had an assembly at her school and the same happened with me.

“I would encourage anyone to join the cadets. It is an incredible experience and if you don’t take it you’re mad.”

Henley Army Cadets were quick to set up online meetings after the outbreak of the coronavirus pandemic and Grace said this had helped her to progress.

She said: “Because I joined later I didn’t have as many oppportunities as everyone else but I passed a lot of subjects through lockdown that would probably have taken me a lot longer to do if it was not for the lockdown. We took a bad situation and made it positive.

“You can never really beat coming here every week and seeing all your friends but it is amazing what we were able to achieve online.”

Cllr Miller said: “I think Grace is a great fit — it’s going to be a good year.

“The important aspect is forging a strong relationship with the community and that’s why it is so valuable for the children.

“One of my charities for the year is the Royal British Legion and the cadets always go out selling poppies.

“I think the cadets are so good for children. It is a fantastic way to teach them about discipline and respect and is not all about firing guns.”

2Lt Haynes said: “Grace is very mature and switched on and she copes well under pressure. She is also very good at talking to people.

“The cadets have to debrief a lot of the time and she is really good at feeding back information.

“She has the ability to command the room confidently and calmly and under pressure she will always perform — she is so reliable.

“The choice was a no-brainer and I didn’t even have to think or question my decision. I know she is really looking forward to it.

“The others were great and I’m sure with time they will develop.”

Tallulah, 17, of Greys Road, Henley, joined the cadets in 2016 and has previously held the ranks of cadet, lance-corporal, corporal, serjeant and colour serjeant. She will attend events around Oxfordshire and speak to cadets, including senior ones whom she will help train, and act as their “voice” within the organisation.

Tallulah, who attends Piggott School in Wargrave, was inspired to sign up for the cadets by her father Nathaniel, who is an instructor and 2nd lieutenant in the Henley detachment and previously served in the army’s military intelligence corps.

Maj Thrussell said: “Henley is probably our most successful detachment within the Oxfordshire battalion and it has won best detachment in Oxfordshire four years in a row.

“The two ways of looking at it are the feedback from the cadets and that they pass more here. Mel does more and the cadets are the most successful.

“Our biggest concern as an organisation is that we are not that well- known. I like to say we are NATO’s best-kept secret.

“What has been really interesting is how we’ve improved in that respect during the pandemic and we are starting to be noticed more.”

The Henley Army Cadets parade every Wednesday at the Drill Hall in Friday Street from 7pm to 9.30pm as well as on many weekends throughout the year.

The cadets undertake training taught by instructors or senior cadets. This can be outdoors in the fieldcraft area or indoors using a purpose-built range and building.

If you are interested, email 2Lt Mel Haynes on 3360hayne@
armymail.mod.uk