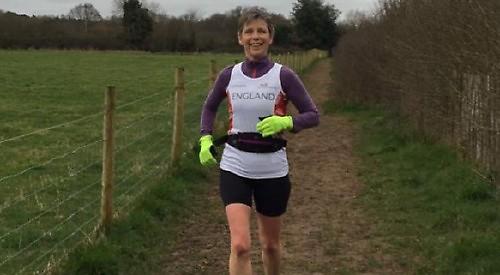 RUNNER Liz Jones is to make her England debut — 16 months later than planned.

The 60-year-old from Henley will take part in the Richmond RunFest on Sunday.

She was all set to make her national bow at the Fleet half marathon in March last year but the event was called off at the last minute because of the coronavirus outbreak.

Ironically, Liz finds herself in better shape now than she was then as she had broken her thumb and bruised a rib in a cycling accident near her home in St Mark’s Road a few days earlier.

She said: “In a way, I feel I have earned my stripes, having got a qualifying place in February 2020 when we didn’t know about covid. It has been deferred several times but now it is almost here.

“Throughout the last 18 months I have kept up with the running. I did a half marathon at the Culden Faw Estate before the Christmas lockdown and a couple of weeks ago I did another at Burnham Beeches. I’ve been mainly running on my own but also with a friend, when allowed, or in a small group of six, when allowed. I have really enjoyed the countryside and listening to the birds singing.”

More recently, she has been running with the Reading Road Runners and the Run Henley group.

After missing out last year, she and her husband Howard took a tour of London wearing her England vest and had her photograph taken at various locations, including the lion statues in Trafalgar Square.

Liz, a mother of two, who is Henley Town Council’s accountant, has been running for 20 years.

To qualify for the England Age Group Masters team in the 55 to 59 age group she took part in the Farnborough winter half-marathon.

She had to finish in the first four and complete the course in under one hour and 45 minutes. She was runner-up in one hour and 42 minutes.

Tomorrow she will be running in the 60-65 category and fundraising for Wyfold Riding for the Disabled, where she is a volunteer.

Liz said: “The work they do is inspirational and makes a real difference to people’s lives. I have raised funds in the past but this one is a bit of a celebration of them being back in business after covid. For me, it’s also a celebration of my 60th birthday, although I am now nearly 61, and the fact that life at the age of 60 isn’t so bad.

“Really all I have to do is get round but I shall be so incredibly proud to be doing it in an England vest and the icing on the cake will be raising funds for my beloved Wyfold Riding for the Disabled. Thinking about the riders, ponies and volunteers on the way round makes it all much more bearable.

“It’s so great that things there are getting back to normal. They had to stop all rides over the covid period and are cautious about riders coming back.

“By the nature of having disabled riders, you must be up close to them.

“That has meant no income coming in, although they have been lucky with grants and other people fundraising. By spending carefully, they have been able to keep all eight ponies and kept them vetted.”

At tomorrow’s race, the runners will set off in groups.

Liz said: “ I am enormously proud to be able to do it. In a tiny way, it makes you feel how it is for the Team GB Olympians and my family are so proud.

“As my husband says, I will run as fast as I can. With a half marathon, you go at a pace and momentum that’s right for you. I would like to do it in under one hour and 45 minutes, that’s my goal.

“Afterwards I will probably put the vest in a frame and put it on the wall. I just hope I don’t get covid beforehand. I have been really careful about where I go and who I see so I don’t get pinged.”

Gill Rushworth, the charity’s fund-
raising co-ordinator, said: “We are very proud of Liz. She is an inspiration to us all and what an amazing achievement to be chosen to represent England in your sixties.”