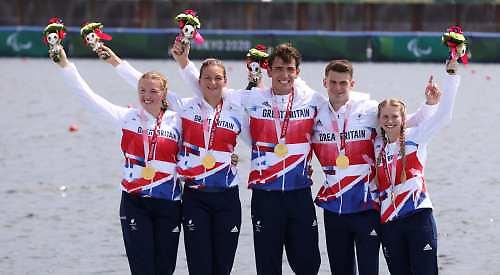 HENLEY’S elite rowers will be celebrated during a Heroes’ Return event in the town tomorrow (Saturday).

Athletes who competed at the Olympic and Paralympic Games in Tokyo will go on an open-top bus tour of the town to mark their achievements.

The Olympic rowers did not live up to their own high standards of previous Games as they won just one silver and one bronze but Team GB took two golds in the Paralympics.

Tomorrow’s event has been organised by Leander Club and Henley Town Council.

Mayor Sarah Miller, who will greet the rowers on the steps of the town hall, said: “The stoicism and dedication of our athletes is an inspiration, especially given the challenges we have all faced as a nation over the last 18 months. There are medals to celebrate but for me it’s about so much more — our athletes are simply awe-inspiring.”

Richard Wheeler, a coach at Leander, said: “We were keen to support the Heroes’ Return as it is motivational for our members, particularly our junior squad.

“As a community rowing club, operating to foster the joy of rowing for all, irrespective of age, ambition or ability, we wanted to be visible in the town to encourage anyone who has an interest in rowing to talk to us about taking up this unique and rewarding sport.”

Rowing commentator Peter O’Hanlon, who was in Tokyo covering the Olympic Games, has helped to organise the day. He said: “The Heroes’ Return is a wonderful opportunity to celebrate our athletes and they are looking forward to meeting everyone who cheered them on from home.”

A total of 23 rowers will take part in the celebration, starting with a row past.

They will leave Leander Club at 10am and go upstream to the River & Rowing Museum and then back down to Upper Thames Rowing Club. If conditions allow, the crews will race each other.

Afterwards, the athletes will board the bus for a tour, led by a marching band made up of players from Shires British Legion Youth Band.

The bus will travel to the town hall via Thames Side, Hart Street, New Street and Bell Street, arriving at the town hall at noon.

Rolling road closures will be in place and Market Place will be closed to traffic. Henley MP John Howell will be part of the welcoming party.

An archway of rowing blades will be formed by members of local rowing clubs before the athletes walk around Market Place to pose for photographs and sign autographs until 1pm.

Free pictures will be handed out to be signed by the rowers. These have been printed by Higgs Group, publishers of the Henley Standard. Flags, chocolate medals and Leander Club hippos will all be provided.

The Mayor will give a speech, as will Leander captain Jack Beaumont, who won silver in the men’s quadruple sculls in Tokyo.

There will also be rowing machines available to try.

At 1pm, the athletes will return to Leander for a reception with club members and their guests and will be joined by Councillor Miller.