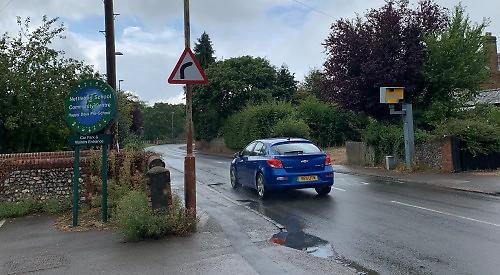 CHILDREN, staff and parents at Nettlebed Community School are backing a campaign to reduce the speed limit through the village.

Headteacher Bethany Greenwood believes the speeding problem in High Street has become worse in the four years she has been at the school.

Several parents have reported near-misses and pupils say they have seen animals being hit by cars going too fast while they were on their way to school.

Nettlebed Parish Council is hoping to persuade Oxfordshire County Council, the highways authority, to reduce the speed limit from 30mph to 20mph.

It has offered “20’s Plenty” stickers to residents of Watlington Street and High Street to attach to their waste bins so that on collection days they are visible to passing traffic.

20’s Plenty for Us is a not-for-profit organisation which campaigns to make towns and villages safer.

There is currently a speed camera on the opposite side of the road to the school next to the pelican crossing but many drivers ignore it.

Mrs Greenwood said: “When these drivers go too fast, they could easily kill a child.

“I believe it is an increasing issue and we have talked a lot about the best way to make a change. There are simply more cars on the road and people are busy with their lives.

“Parents have reported it to me more and more over the years. We have so few parking spaces, so we always have to be concerned around pick-up and drop-off times. I would urge those drivers to slow down because children’s lives are at risk.”

The school asked all 129 pupils to make “20’s Plenty” posters in support of the campaign.

Mrs Greenwood said: “We think it is really important for the children to gain awareness of their community and realise they have the power to effect change and that they have a voice.

Olivia Martin, who is in year 6, said: “I think it’s important that we talk about this. I know there have been multiple animals that have suffered from cars going too fast.

“It’s getting to the point where it’s dangerous and people are becoming scared to cross the road. I’m not scared because I cross the road every day. It is scary when cars go fast through red lights and I think that I could have stepped in the road.

“I have seen near-misses with animals and there was one time I was crossing the road and a car ran the red light but luckily I didn’t step out. It is quite upsetting and quite annoying and it could be avoided.”

Logan Herbert, who is in year 4 and lives in Swyncombe, said: “Cars have been going too fast. Drivers need to make sure they slow down and don’t hurt any creatures. The road where I live is very narrow and there’s a lot of nature around it.”

Classmate Sadie Roberts, who lives in Middle Assendon, said: “When I’m trying to cross the road, the cars are whizzing past me and it takes a long time for them to stop. They should slow down.”

Mrs Greenwood said the danger to children was made worse by the large number of heavy goods vehicles that used Nettlebed as a shortcut.

“We get quite a lot of lorries,” she said. “A few years ago, there was a boy who stepped into the road to avoid something on the pavement and he required hospital treatment for his foot.”

The parish council is due to receive an update from the county council next month about what can be done to reduce the speed limit.

Vice-chairwoman Barbara Lewis said: “We got the crossing in 2003 but we first asked for it 40 years earlier. The county council said there were not enough accidents or fatalities but fortunately there was a councillor who believed in what we were trying to do.

“The problem of getting the crossing was that the lollipop ladies were being made redundant at around the same time.”

She said the initial take-up for the free 20’s Plenty stickers had been disappointing.

The county council says there is potential for 85 per cent of 30mph roads in Oxfordshire to be reduced to 20mph, subject to local opinion and available funding.