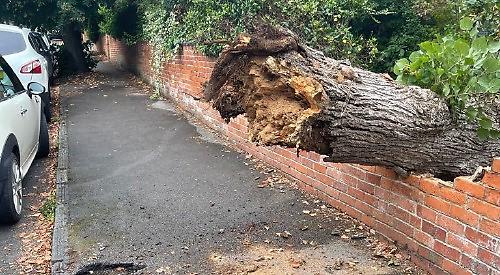 A TREE fell down and destroyed part of a boundary wall at a house in Henley only days after council officials were alerted to the danger.

Felicity Smith, who lives Vicarage Road, on the corner with St Mark’s Road, claims Oxfordshire County Council failed in its duty of care to act before it was too late.

The 20ft lime tree in St Mark’s Road had been leaning at an angle before it crashed down into Mrs Smith’s back garden during Saturday night.

It smashed through the red brick wall and went through a wooden fence behind it, crushing some established bushes and narrowly missing a shed.

The base of the tree was exposed where it came away from its roots, leaving a hole in the ground, and the pavement was partially blocked by the trunk.

Mrs Smith had contacted the council, which is the highways authority, via the Fix My Street online portal on Tuesday last week and posted a picture of the tree with a note reading, “Tree about to fall down”.

She received an automated response to say that the issue would be investigated. The next day the council replied to say that a site visit had been carried out, adding: “We have instructed our contractors to carry out works to the tree... these works will be undertaken in the coming weeks.”

Mrs Smith, who has lived in her house since 2016, is upset that a decision was not made to fell the tree immediatly.

She said: “We only noticed the tree last week when one of our neighbours mentioned it to us so maybe it has only looked like it was about to fall for a couple of weeks.

“I sent a picture of the wonky tree to Fix My Street and said that it was about to fall over and they got back to me the next day.

“What was concerning in the reply was that they didn’t feel it needed to be dealt with straight away, especially after someone was sent to examine the tree.

“Now a large part of the wall is damaged, the tree having just missed the shed as it went through the boundary wall, as is the fence that was behind it and some bushes and things. Trees do fall down but when people tell you one is about to fall down you have a duty of care to deal with it and now a wall is ruined.

“It is going to cost the taxpayer more than the cost of taking down a tree.”

On Monday, the tree and the damaged pavement were still exposed but the base of the tree had been sawed down and a safety cordon was put in place later.

Mrs Smith said: “There was a hole in the pavement, which was a hazard, and they should have put some tape up immediately.

“If you were blind, you wouldn’t expect a tree to be sticking out halfway across the pavement and for there to be a hole in the ground.”

Mrs Smith, who is retired and has lived in Henley for more than 20 years, is now worried about the sale of her property, which is currently under offer, and has been in touch with the buyers through their solicitor.

She has also been in touch with her home insurers so that repairs can be carried out as soon as possible. She will then be asking the council to reimburse her the costs.

Mrs Smith said: “We’re now waiting to hear from our insurance company because the advice is, if a tree comes down on to your property, to contact them first and obtain receipts for the work.

“I am more than hopeful that the council will pay as I would be expected to if my tree fell down and caused damage.

“What I am really upset about is that the council has let this happen. I don’t think they have done their duty of care.”

A council spokesman said a routine inspection of the tree was carried out in mid-April and it was earmarked for removal at a later date.

He continued: “Concerns were reported via Fix My Street and it was inspected again on September 13. It was judged not to have deteriorated further. If it had been judged to have posed an imminent danger, it would have been removed immediately.

“We are organising the removal of the tree in order for the repairs to go ahead and are working with the owner of the damaged property regarding any claims they may make. Contractors made the site safe on Monday.

“We will be investigating what caused the tree to fall and whether any improvements to our procedures and processes are needed.”