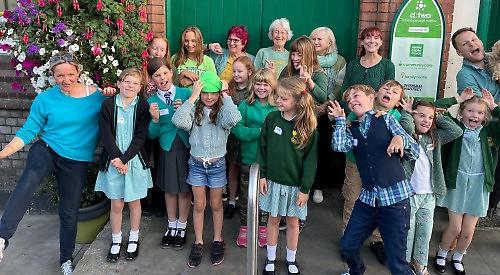 There were 14 stalls set up in Falaise Square focusing on different aspects of the environment.

The event was organised by members of Greener Henley and was part of Great Big Green Week, a national initiative designed to raise awareness of the threat of climate change.

Among the stallholders was Professor Richard Fortey, who was inviting members of the public to bring along varieties of fungi for him to identify.

The historian and palaeontologist, who lives in St Andrew’s Road, Henley, had about 25 varieties of his own displayed on a table and proved to be popular.

Prof Fortey, who is president of the Fungus Survey of Oxfordshire, said: “My job is to make people aware of the wonderful diversity of fungi and their importance in nature.

“It’s important for people to know that if it wasn’t for fungi, practically all life on earth would not be possible. If it weren’t for fungi, wood would not break down and our woodlands would be an impenetrable mass of branches. The fungi are the natural recyclers of nature.

“The rarest one I presented was the bitter knight. None of them would kill you and it’s a myth that all fungi are poisonous apart from the ones you buy in the shop.

“Most of them are fairly common but the bitter knight is only found in the Chilterns in warm summers on the chalk.

“There are thousands of different species and you have to know quite a bit. Some species I can identify in seconds but others I would need to go away and examine.”

Rebecca Chandler-Wilde was promoting the work of Henley Town Council’s climate emergency working group, which was set up in 2019 with the aim of reducing the town’s carbon footprint through initiatives such as retrofitting buildings to make them more energy efficient and planting trees. Henley has the highest CO2 emissions footprint in South Oxfordshire and Mrs Chandler-Wilde was offering advice on how residents could help by reducing their carbon footprints.

She said: “We can help you to get cheap solar panels and we’re giving away energy saving tips. We’re also giving people a chance to calculate their carbon footprint.

“People often feel like it is too much work or too expensive to make changes but it simply isn’t the case. The cheapest, simplest and best thing you can do is to change your electricity supplier to someone who offers 100 per cent green energy.

“We have some very good strands of work but we could do more in terms of promoting what we do to raise awareness, which is why events like this are such a good idea.”

Members of Henley Rotary Club were advising on alternatives to single-use plastic products and had a “plastic soup” box with different products for children to stir, includeding bamboo toothbrushes and cutlery.

The Rotarians were also encouraging people to buy items that don’t come in plastic packaging. Jeremy Gaunt, the club’s environmental team leader, said: “Internationally, Rotary has a series of focuses and the most famous one is to eradicate polio.

“One of our focuses now is on the environment. As part of that, the club has joined the End Plastic Soup campaign to stop plastics from ending up in our beautiful rivers and seas. You can help by picking it up if you see it, or by not having it in the first place.

“There are things you can buy quite easily that either don’t involve plastics or, if they do, it is much more than single-use. If by showing this we can get two or three people to use less plastic, that’s our job done.”

This offers residents the chance to hire one of two Toyota Yaris hybrids which are parked outside Gibbs & Dandy in Reading Road and in Upper Market Place. The club currently has about 30 members.

Patrick Fleming, chairman of Greener Henley, was asking visitors if they would be interested in planting trees in their gardens as part of the town council’s efforts to help the environment. Last year, 700 native trees were given to residents, landowners and schools.

Mr Fleming said: “The whole theme is about the environment. It’s not just about climate or the carbon emissions, it’s also about providing land and biodiversity. Our idea is to plant as many trees as we can to sequester carbon and provide habitats for birds and insects.”

Julia Samuyi-Adams, of Greener Henley, was overseeing a tree of people’s green pledges.

Other stalls included the Henley Toad Patrol, the Henley branch of Walkers are Welcome and Clean Air for Henley.

Henley Youth Choir sang songs to do with nature in their rehearsals.

Diana Barnett, who co-ordinated the event, had a stall for children to design beetles and butterflies out of recycled paper.

She said: “The bazaar was very busy. There was lots of interest and Richard Fortey’s fungi stall was extremely popular.

“It was nice to get the whole community involved. Anything like this helps to make people more aware of the sort of changes they can make to their own lives and most people who came were very supportive.”