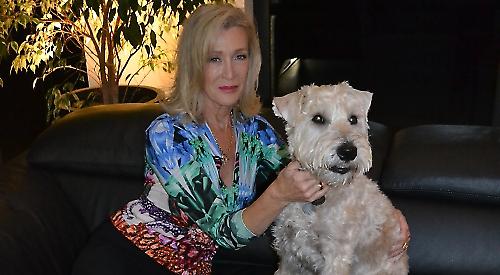 A WOMAN from Henley has urged people to use “quiet” fireworks after witnessing one of her dogs shake with fear at the noise.

Donna Crook, a town councillor who lives in Abrahams Road, has two rescue dogs, Binky, a terrier cross, and Bramble, a spaniel cross.

During last month’s Henley Festival, when there was a fireworks display every night, she gave the dogs medication and turned up her radio but two-year-old Bramble was still “absolutely petrified” by the noise.

Now she is worried more animals will suffer the same ordeal in the run-up to Bonfire Night and wants people to use quiet alternatives to traditional fireworks.

Councillor Crook, whose house is triple-glazed, said: “Bramble physically shakes when the fireworks go off and it’s quite upsetting to watch.

“He will shake and quiver and it goes on for half an hour after the fireworks have stopped.

“I have used calming medication and I try turning the radio up loud but nothing seems to work. It’s not like I can remove him from the situation because it happens so frequently at this time of the year.

“I just think it’s unfair on animals. There are quiet fireworks and if people used those it would be fantastic.

“We have a higher than average amount of fireworks going off in this area from October to December.

“There are always people having their own little displays, which is ridiculous.

“Because we live on the River Thames, the noise is amplified. I think people feel that if the fireworks are louder then they are somehow bigger but they aren’t. It’s almost as if they are showing off.

“I really don’t see why the noise is necessary and it’s such a waste of money — just give the money to charity.

“I don’t want to spoil the fun for anyone but they should just use quiet ones and be more considerate.”

Cllr Crook is also concerned about the impact the bangs have on people with autism or post-traumatic stress disorder.

She presented a motion to the town council’s town and community committee in May asking it to encourage firework display organisers to consider using alternatives to traditional fireworks, such as a light show or drone displays.

She said: “They are more environmentally friendly and do not cause spent waste to fall randomly, do not startle vulnerable people or distress animals and can provide more visually impressive and flexible displays.

“Technology is changing all the time and I think in a few years’ time there will be better alternatives but for now I think people should just have quiet fireworks.”

However, the existing legislation, which limits the sale of fireworks to those measuring 120 decibels or less, was deemed appropriate.

In the same year, the Henley Standard launched its Ban the Bangs campaign, encouraging the use of quiet fireworks.

This was in response to an appeal by Wargrave resident Jane Foddy, who first became aware of the issue when her Irish soft-coated wheaten terrier, Teddy, had a bad response. Later, she appeared on ITV’s This Morning to discuss the issue with presenters Eamonn Holmes and Ruth Langsford.

Mrs Foddy, a PR consultant who lives in Loddon Drive with her husband John, said: “It’s not necessary these days because there are alternatives. It is getting better but we still have a way to go.

“Using quiet fireworks is much kinder to people and animals and it is such a simple solution. Awareness is a fantastic thing and I’m glad people are starting to realise just how far-reaching the damage can be.

“It needs local authorities to get on board and press organisers of events to make them realise how animals and people suffer.”

The Henley Festival has defended its use of traditional fireworks.

Chief executive Jo Bausor said they were abn “integral” part of the five-day festival and made it “spectacular and memorable” for the audiences.

She added: “By selecting the fireworks carefully and responsibly — and taking into account the proximity of houses from the firing area — we can ensure that at this point the noise levels will not peak at more than 80 to 85 decibels.”

A fireworks event advertised as “the UK’s largest low-noise display choreographed to music” will be held at the Culden Faw Estate from 5pm to 9pm on Bonfire Night.

A spokesman for Xplosive Events, which is staging the display, said: “Fireworks do not have to shake the earth. In fact, what we take away by reducing noise levels is significantly made up for in visual impression.

“Low noise does not mean no noise. However, without the huge explosions, many more families are able to enjoy a breathtaking and enormous fireworks display without upsetting children, or causing disruption to the local community.”