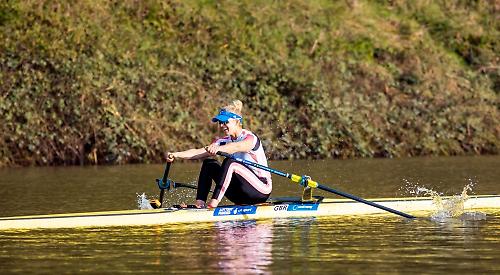 The former Leander Club captain, 33, won a silver medal with Katherine Grainger in the women’s double scull at the Rio Olympics in 2016.

The 33-year-old lives in Bix with her husband Ric Edgington, a fellow Olympic medallist who has also retired.

She narrowly missed out on a medal in Tokyo during the postponed Games this summer, coming fourth in the single sculls.

She said: "After 11 years in the British Rowing Team, it is time to step out of the boat.

“I always knew this decision wouldn't be easy and it's incredibly emotional to write this, it makes it real. However, I always said I wanted to walk away knowing hand on heart I [had] given it everything – mind, body and soul. I did that.

“You are only as good as your last race and mine was fourth in the single scull at Tokyo 2020. Some may say it is the hardest place to finish, but I showed the best of myself over the eight-day regatta.

“Delivering everything I had learned over 14 years under the biggest pressure – I am proud of that.

“Three Olympic Games, one Olympic silver medal, European champion and World Championship medals. From the biggest boat, the women’s eight, to the smallest the women’s single.

“I have rowed with and worked alongside some of the most driven and focused people on the planet, something I am truly grateful for. The friends I have met through the world of sport and especially the wonderful sport of rowing will be lifelong.

“The power of sport creates an unbreakable bond. Not to mention I met my husband while rowing.”

In 2010, Thornley made the GB senior team and moved to Henley to join Leander Club, where she met her Edgington, who won bronze in the men’s eight at London 2012 and silver in Beijing four years earlier.

Having grown up in Wrexham, she took up rowing in 2007 after ditching her original plans to become either a showjumper or a model.