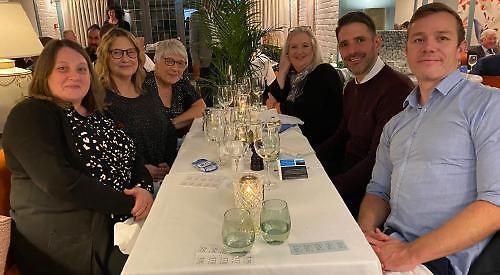 A CHARITY in Henley has appealed for more support during the winter despite having its best ever year for fundraising during the pandemic.

Nomad is a community project based at the d:two centre in Market Place which helps children, young people and families.

It also runs the Henley food bank, which received more than £85,000 worth of donations last year.

Peter Lloyd, a trustee of the charity, said there was “a tough winter ahead”.

Speaking at the charity’s annual meeting, he said: “Demand for our food bank fell over the summer but it is now rising again.

“There’s much more to be done so please continue to support us as you have done in the past.”

Mr Lloyd said: “The year started on April 1, 2020, two weeks after the start of lockdown. It was a time of anxiety and many people found themselves without regular income.

“The trustees anticipated two things; firstly, that there were people who wouldn’t be protected by the furlough scheme and more people would fall on hard times and, secondly, that people would be less generous. We were right on the first point, demand did rise but wrong on the second. Donors recognised our needs and responded generously.

“We’re very grateful and thankful to all of you who have helped us through the year.”

The income from work in schools went down from £11,115 to £4,443 because the charity wasn’t allowed to go into them for most of the year.

Mr Lloyd said: “We’re extremely grateful to all those who have given time, money and food.”

The charity replaced its old vehicle with a one-year-old van, which is used to transport food and equipment and take children and young people on day trips.

Nomad reduced its staff by one during the pandemic, which saved £10,000, but the role has since been reinstated and the charity hopes to add a new staff member in the new year.

Chris Ward, a businessman and Nomad fundraiser, said: “I’ve been blown away by the support we’ve received. It has been the best ever year of fundraising for Nomad.

“The money has gone towards a new van and a much-needed kitchen refurb for the people at d:two and to help cover salaries and possibly one new addition to the team in the new year.”

Mr Ward was among those who took part in a virtual row of the Channel which raised £10,000.

He also organised a fundraising dinner at the Relais Henley earlier this month which raised another £10,000. The 50 guests included former BBC director-general Lord Hall and his wife, the Deputy Lord Lieutenant of Oxfordshire, who live in Henley. Hotel owner Grace Leo provided a subsidised three-course meal. This helped Nomad reach its fundraising target for the year of £25,000 to mark its 25th anniversary.

Mr Ward said it was one of Nomad’s most successful ever nights and he planned to make it an annual event.

Nomad manager Tim Prior said: “Nomad isn’t just a food bank, it is community work, schools work, after-school work and family support. Back in 1996 we were established with a single youth worker with the simple remit to build positive relationships on the streets.

“There’s often a false assumption that Henley doesn’t have any of these issues. Why should it — it’s a beautiful town?

“I can categorically say that we are experiencing these issues on our doorstep. Whether or not you are on a high or low income, personal situations can change very fast. Loneliness and isolation are problems for many.”

He said the charity had provided grants to help a young person learn the piano, to provide laptops and white goods and to buy a single father a mobile phone as it was the only way he had of contacting his child.

The meeting marked the retirement of Mr Prior’s mother Sue as secretary of the charity’s trustees after 25 years.

He said: “Some say you should never work with family members but working for the best part of 13 years with my mum has been a real honour.

“As long as I can remember, mum has been supporting people. It has never been a job for her. it’s much more of a lifestyle. We are very proud of everything she has achieved. Her legacy in Henley will last a long, long time and the team and I will miss her immensely.”