Girl scoots off with prize for her anti-pollution superhero 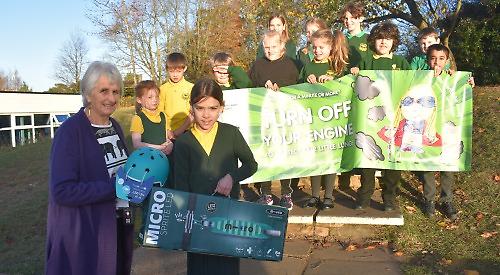 MEET Miss Awful Air Away, the superhero who sucks in dirty air and blows it out clean.

She was invented by Alana Gove, a pupil at Valley Road Primary School in Henley.

The character will now be used in the council’s Turn It Off campaign, which encourages drivers to switch off their vehicle engines when they stop, even briefly.

Petrol and diesel vehicles emit pollutants that are linked to illness and lung disease, particularly in vulnerable people such as children and older people.

Alana was presented with her prize of a scooter as a surprise at a school assembly.

The school received a banner featuring Miss Awful Air Away, which will go up on the fence outside the school telling drivers to “Turn off your engine to protect our little lungs”.

Alana said: “The idea just came up in my brain. Her hands can suck in rubbish and teleport it to a rubbish bin. Her earrings suck in carbon dioxide and change it to oxygen. I’m really happy I won and excited to play on the scooter.” Her mother Gemma said: “It was great to see her get the award. We’d kept it a secret for quite some time so it was nice to see her little face.

“She’s so humble so it’s nice to see her get some appreciation.” The award was presented by Sue Cooper, cabinet member for the environment and climate change at the district council.

She told the assembly: “Somebody from this school has won a competition all about preventing pollution. Nobody wants to breathe in dirty air.” She asked the children to raise their hands to show how they got to school. About two-thirds said they sometimes walked and about half also said they sometimes came by car.

One boy said his father had a hybrid car which could get him to the school using only electric power.

Councillor Cooper told the children that she didn’t expect them to walk to school when it was raining but they should try to walk as often as possible.

Sixty-six entries to the competition were received from children across South Oxfordshire.

The council asked for depictions of heroes who could easily get about without using a car.

The entries were judged by council leader David Rouane.

He said: “It was a close run thing as there were several vying for the top spot but I chose Miss Awful Air Away as she is an all-round superhero who not only cleans the air but also picks up litter and combats climate change.

“In that respect, by using cars less and picking up litter, we all have superpowers.”