RAF pilot rows Atlantic as thanks for daughter’s cure 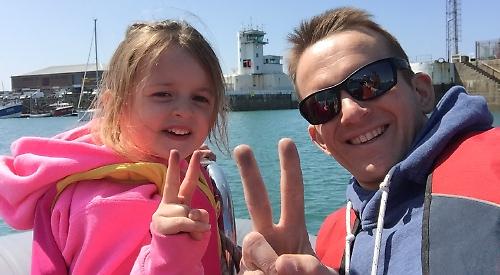 A PILOT who used to be based at RAF Benson rowed across the Atlantic to mark five years since his daughter was cured of leukaemia.

Wing Commander Phil Holdcroft, 42, and three colleagues took part in the 3,000-mile Talisker Whisky Atlantic to raise money for the Starlight Children’s Foundation, which supported his daughter Isla when she was in hospital.

The crew finished second in the race and raised almost £50,000.

Isla, who is now nine, was diagnosed when she was 22 months old after her mother Beth, 41, noticed she was drained of colour and uneasy on her feet.

She had more than 1,000 rounds of chemotherapy at the John Radcliffe Hospital in Oxford and then in October 2016 her parents were told she was in remission.

Wg Cdr Holdcroft, who was based at RAF Benson for almost 10 years flying Merlin helicopters, then decided to mark each year of her recovery with a different challenge, such as endurance races and triathlons.

He said: “When my daughter had leukaemia, I felt helpless and unable to do anything to support her. But through my passion for endurance sports and races I have been able to raise money and awareness for some amazing charities that have supported her.

“It was also a way of trying to understand what she went through and connect with her more.

“To mark the fifth year, I wanted to push myself to the limit. All the challenges needed to have risk and uncertainty and the big finale was this row across the ocean for Starlight.

“At the end of Isla’s gruelling treatment for leukaemia, Starlight granted her wish to meet Santa Claus in Lapland.

“After two Christmases spent in hospital, words cannot describe the sheer joy of spending unadulterated precious family moments in a magical place. The absolute privilege and memories will live with us forever.”

Wg Cdr Holdcroft, who has another daughter, Isabella, 11, asked fellow RAF servicemen and friends Si Berry, Sonny Roe and Chris Carrington-Smith to join him in the race, which started in La Gomera in the Canary Islands, on December 12. They finished just over 36 days later on January 17.

Wg Cdr Holdcroft, who is a battlefield helicopter pilot and has completed seven operational tours in Iraq and Afghanistan, said: “I wanted it to be audacious and enormous so I asked some of my closest friends to do it with me.

“The whole journey with Isla was about being a team so embarking on this with my friends felt right.

“We struggled as a team because we are based in different areas and a lot of the training together was done over video link.

“We got together on two occasions to train on the boat and only had two weeks’ training under our belt before we started the challenge.

“We had a lot of individual sessions with a personal trainer who gave us both physical and psychological training to make sure we were prepared for the row and that we could actually row in the ocean.”

During the challenge, the rowers had to battle with sleep deprivation, salt sores and physical extremes. They rowed14 hours a day and usually didn’t get more than 90 minutes’ sleep at a time.

Wg Cdr Holdcroft said: “The row itself was brutal and a really punishing regime, with sleep deprivation and being constantly pushed around by the waves.

“It was very punishing on both the body and the mind and it really was on the edge of what was possible.

“But there were so many highs too — the incredible night sky full of stars and the ocean where we saw incredible wildlife.

“There were quiet moments where you were on your own with your thoughts — that was a big part of it. We were able to push and support each other in the bad times.

“It was a personal challenge for each of us but for me it had a higher purpose, raising money and awareness for the charity and that gave me an extra fire in my belly.

“Crossing the finish line, I felt elation and relief in equal measure. Knowing that I was going to be able to hug my girls and that we had done it was incredible.”

To make a donation, visit www.atlanticflyers2021.com