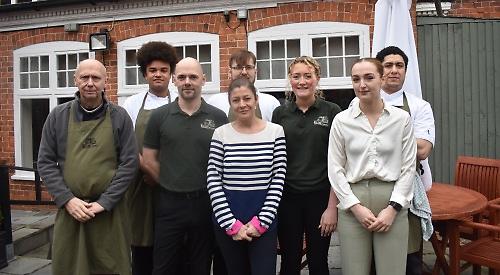 A COUPLE have been told they are no longer wanted to run an award-winning pub-restaurant.

Mary and Nick Galer have been in charge of The Miller of Mansfield in High Street, Goring, since 2014.

But now their landlord has decided to make it a managed business after the couple said they couldn’t afford a 90 per cent rent increase.

The Galers and their staff have been told they can stay on as employees if they want.

In September landlord Stonegate proposed that the couple renewed their lease together with the rent rise.

When the Galers said they couldn’t pay the amount, Stonegate asked for the keys to be returned this month and wouldn’t consider any other options.

The couple will close the pub tomorrow (Saturday) and do not know when Stonegate will re-open it or what changes will be made to the business or who is coming in to manage it.

Ms Galer said: “We were told by Stonegate in September about the rent increase and said we couldn’t pay it.

“We asked about different options and about buying the freehold from them. They said no and that if we couldn’t pay the rent they wanted the keys back.

“We didn’t hear anything over Christmas and on January 4 they made contact.

“Now it has become about certainty because we don’t know what’s happening with bookings and everything.

“We told staff at the end of December that we weren’t sure what would happen. Then the village started talking as people told their families. It’s a pretty emotional feeling for staff and customers, with everyone not sure if it’s going to be us or not when they make a booking.

“We’ve employees who we rent a flat to a few doors down and we don’t know if they need to give notice.

Mrs Galer said it was also difficult for themselves and their children, who are aged eight and 12, adding: “It’s their home.”

She continued: “With regards to if we do stay as employees we’ll have to see what the business model is.

“The team have become our family — that happens when you work 12-hour days together — and we’ll have to make sure that they’re all safe and okay first.

“Then after that we’ll be able to make decisions about our future. What we’re most proud of is that everything we’ve done, it has been as a team.

“People have come as children and gone off as adults and really developed here in terms of confidence and ability.

“Nick and I have also nicely developed. We’ve realised that some stuff doesn’t matter and we don’t need to argue about work at home, work is work.

“The children have become sociable and like being around people. They’re well behaved because we’ve taught them to behave when they’re in the pub.

“We always knew we wanted to be a bit more than your average pub. There are a lot of other pubs around here and we thought there was a market for that.

“Nick’s style is simple ingredients cooked to their best and we’ve been able to do that well. That was our model. We attract a crowd from London because the rooms are nice and they can stay in the village.

“We’re still busy with bookings now. We think they are transferable but we’re not 100 per cent sure.

“The bedrooms will still be there so they’ll definitely be fine for a while but we don’t know if they want to keep them or change them eventually.”

Nick Galer previously worked as a sous chef at the Goose in Britwell Salome under 2005 Roux scholar Matthew Tomkinson. He was also the first head chef of Heston Blumenthal’s the Crown in Bray.

Under their stewardship, the Miller has attracted acclaim, including winning the Good Food Guide’s readers’ restaurant of the year and being shortlisted for the Catey Awards’ newcomer of the year.

They have just been included in the Top 100 Gastropubs Foodie’s Favourite Award 2021.

Before the Galers took over the pub, it was run down and due to be closed by South Oxfordshire District Council because the kitchen posed a health risk.

Stonegate is the UK’s largest pub group, owning more than 4,500 sites. It owns brands including the Slug and Lettuce, Popworld and Be at One.

A company spokeswoman said: “The lease agreement on the Miller of Mansfield is due to expire and the property will be transitioning to our managed division.

“We remain in constant dialogue with the leaseholder regarding this transition and will continue to engage in order to enable the necessary direct conversations to take place with the team on site, including Nick and Mary.

“Our focus will be on ensuring that the pub is able to continue providing the excellent levels of service to customers and community alike.”