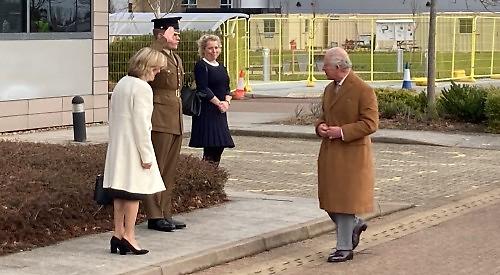 A TEENAGE boy from the Oratory School in Woodcote welcomed Prince Charles to Oxfordshire.

Oskar Jordan-Barber, 17, is cadet senior under officer for the school’s Combined Cadet Force and is also cadet to the Lord Lieutenant of Oxfordshire Marjorie Glasgow.

He joined Mrs Glasgow at Astroscale in Didcot for a visit by Prince Charles.

The company is developing technology to capture space debris and defunct satellites in space for removal and repair.

The Prince used the occasion to call on nations to sign up to environmental deals for space as they had “made a mess of this planet”. Oskar said: “It is a great honour and privilege to have had the opportunity to meet HRH the Prince of Wales.”

Major Scott Bosher, the Oratory’s contingent commander, said: “Oskar’s bearing and turnout were of the highest order for this important event.

“A number of visitors commented on how smart he looked. He should be very proud of his achievement.”

Oskar is the first Lord Lieutenant’s cadet from the independent school since it formed a cadet force.

As well as accompanying the Lord-Lieutenant, Oskar also represents the cadet forces in public speaking.