I want us to be free of plastic 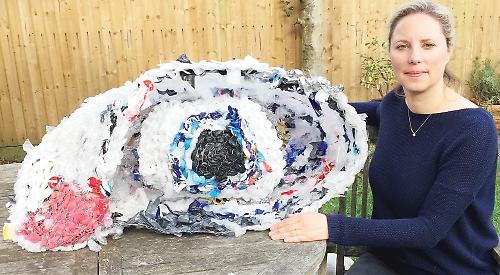 A CAMPAIGN to make Henley “plastic-free” has been revived.

Julia Carey, an environmental activist, says the town had made great strides until the coronavirus pandemic slowed progress.

To be accredited, Henley needs to meet criteria set by Surfers Against Sewage, a marine conservation charity and campaign group.

Mrs Carey, 43, who lives in Reading Road, Henley, said: “To get to that point we need to collate a lot of evidence of us being a very passionate town about becoming disposable plastic-free.

“We have done a lot over the last couple of years, which has included getting the town council to pass a motion of support and holding events to promote the message but, sadly, covid slowed us down.”

The group needs to find six business “champions” which have taken at least three steps to replace disposable plastics and 20 “community allies” to sign a pledge to promote the message.

It hopes to gain accreditation by the time Councillor Miller’s term of office ends in May.

Mrs Carey said: “A lot of businesses might be worried about signing up because they might think they have to be perfect but it is not about that.

“All they need to do is show that they are making small efforts, such as replacing water bottles with reusable ones, having milk delivered in glass bottles or replacing bin liners with cardboard boxes. These are really small changes.

“We need to find six businesses that will each make three changes.

“These efforts might seem minute but they are integral to the mindshift we need to make to move away from using disposable plastics for convenience.

“A few years ago we were coming home with plastic bags from the supermarket and now it is normal for us to take our own bags.

“If we keep making these minute changes it will become totally the norm and we can make that huge leap to the next stage.”

Mrs Carey, who has worked as a green consultant with the Henley Festival and Henley Royal Regatta, believes the campaign will boost tourism and trade.

She said: “Being plastic-free will increase footfall and we ought to want to make our beautiful town clean. I do think the town is in a better shape now than it was a few years ago.”

Businesses to have signed up so far are dry cleaners Reids of Henley and Salon of Chi, both in Reading Road, and party organisers Atticus + Hope in Marmion Road.

Reids has significantly reduced its use of single-use plastic and the salon uses biodegradable towels and has stopped using foil when highlighting customers’ hair.

Community allies can be spaces, venues, groups or businesses which follow and promote the message of disposable-free plastic.

Mrs Carey said: “We have to get businesses and community allies to sign a pledge to say you are committed to raising awareness and supporting the aim. It is about trying to create a disposable plastic-free network.”

The group has already met the criteria for public events but more will be needed on an ongoing basis to help “educate” the public.

Examples have included the War On Plastic: Recycling & Reduction exhibition at the River & Rowing Museum, litter picks around the town, a talk hosted by Greener Henley and the two screenings of the documentary Bag It, one at the d:two centre and the other at the town hall.

Mrs Carey, who lives with her husband Paul and their three children, Phoebe, eight, Charles, six, and Louise, three, who all go to St Mary’s School, said: “This is an opportunity for everyone to do their bit.

“ If we can get to the stage where change is normalised, we are not even thinking about it anymore. Convenience has always been the problem. Disposable plastic is convenient but when I go around town there is suddenly a more positive response to not using it compared with a few years ago.

“When Sarah Miller and I tried out the Refill Henley campaign in 2017 we went around the shops and restaurants and people didn’t seem interested at all. Now people think it is really important. This has been helped by the likes of Greta Thunberg and David Attenborough and his hugely popular Blue Planet series.

“During the covid lockdowns people went back to baking their own bread, sewing and mending and perhaps in that way people have changed their mindset.

“Customers are becoming more aware of the plastics that they use and they now shop with a level of expectation that the businesses they go into are doing something to reduce the amount of plastic that they use. My vision for the future is to see no disposable water bottles and to have a water fountain in Market Place. We do have a fountain but it is in the Greys Road car park and it is by the loos. We need a more accessible one.

“I would also like to see no plastic coffee cups. Most people have their own mobile coffee mug now. All these things are really doable but we need retailers to agree to it.

“There is a real appetite for it and that is reflected in the rising numbers of people conversing about the topic on the Henley Plastic Reduction group on Facebook. It now has more than 800 members.”

Mrs Carey said Henley being accredited was important for the future.

She said: “Being a disposable plastic-free town does not mean that we are perfect but it does mean we are trying to take strides towards that. Once we have been accredited it is then about making sure we maintain it by having regular meetings and public community events, such as litter picks.

“Getting accreditation is that first step in taking Henley to the next level as a community and we are concentrating our efforts on the environment.

“Children are growing up learning about plastics and pollution and the environment in school so I am confident that those who come after us will support this.”

Six ways to reduce plastic use

Invest in a water filter instead of buying plastic bottles of water.
Use alternatives to bin liners. For example, use a “naked” bin for dry, recyclable products.
Order milk from a local milkman in returnable glass bottles.
Swap cleaning products for refillable bottles and washable cloths and sponges for cleaning with.
Swap lightbulbs for energy-saving, long-lasting ones.
Swap bubble wrap for newspaper for sending parcels.