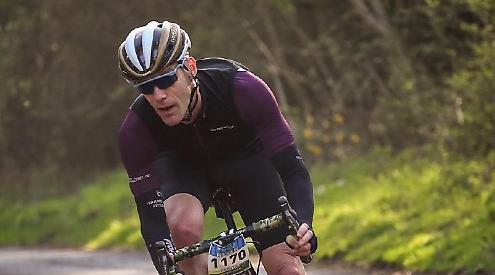 THE family of an experienced cyclist who was killed while riding in Henley are calling for greater awareness.

Simon Richardson, 58, died on April 4 last year as he was cycling on Marlow Road away from Henley.

He was found in a ditch by the side of the road, which was closed for several hours while the emergency services attended.

Mr Richardson, who was in traumatic arrest and had multiple injuries to the left side of his body, was pronounced dead at the scene.

At the time of the incident, Thames Valley Police said he had collided with a tree and that no other vehicles had been involved.

But on Tuesday, a coroner recorded a narrative verdict, saying there was still unanswered questions about what happened.

Mr Richardson was a sales executive from Windlesham in Surrey and was married with three children.

His widow Camilla told Oxford Coroner’s Court that her husband was an experienced cyclist and was aware of the dangers of riding on the road.

Mrs Richardson said: “The day Simon died was the day before my birthday and the last thing we did together was collect my birthday cake from the bakers.”

On the day of his death, Mr Richardson had changed into his cycling gear and left his clothes on his bed so he could change into them when he came back.

Mrs Richardson said: “He said, ‘Okay I’m going to go and ride my bike in a circle’ — he was an extremely experienced cyclist.

“He cycled across Europe and took part in several bike races across the continent. He cycled 430,000 miles without ever falling from his bike.

“He was aware of the dangers of riding on the road and he taught us not to ride on road markings and puddles that could hide potholes. He kept his bike in an immaculate condition and the bike he was riding when he was killed was worth £5,000.”

James McFarlane, who was Mr Richardson’s manager at Endura, a cycling apparel brand, said: “Simon was a cycling obsessive — he was an expert.

“The chances of him crashing his bike while taking a drink from his water bottle are very small and just not credible.”

Witness Ana Maria Craciun said she had been on a walk with her partner and they were driving home again when she spotted Mr Richardson had fallen off his bike.

She said: “I saw the bike and I saw Simon after that and he was in the ditch. I asked my partner, ‘Can you turn around, I want to check on him’. I said to Simon not to move. His legs were up in the ditch and I said. ‘Please don’t move’ but he was trying to take off his helmet.

“He was conscious for some of the time. He was barely able to say his name and to keep him conscious we started to count together. He said that everything, everywhere was hurting.”

Katrina Fox and David Pratt had overtaken Mr Richardson in their car before the incident.

Ms Fox said: “We had been walking around Stonor Park and as we were coming up to Marlow Road there were lots of cyclists around.”

She said there was slow traffic in front of them and it became clear that there was a cyclist on the road and drivers were waiting for the right moment to overtake him.

Ms Fox said: “We are used to cyclists so we waited until it was safe to overtake.

“But he had started to move in a way that was not normal so after we overtook him we turned back to see if we could see him. Something in the way his bike was moving caught my attention and I couldn’t see him on the road anymore.

“As we were overtaking him he got a bottle out but I didn’t see him taking a drink.

“I wasn’t sure what happened to him and all that I was thinking was that we should find somewhere to stop to help.”

The couple turned around at Meadows Farm Studios and joined Ms Craciun who had already stopped to help Mr Richardson.

Ms Fox called for an ambulance, which arrived after about 20 minutes.

Martin Porter QC, representing Mr Richardson’s family, pointed out that the wing mirror on the passenger side of Mr Pratt’s car was damaged.

Mr Porter said: “What I suggest really happened is that Mr Richardson was forced out of the road by Mr Pratt driving too close.”

Mr Pratt said the wing mirror had been broken for a number of years and had come off the week before.

He said: “There was a queue and it became obvious that there was a cyclist ahead of us.

“After we overtook him, we were trying to look behind us to find out what happened.

“We turned around towards Henley and we saw a car had stopped.”

Mr Porter said: “I’m going to suggest that you could not see where he was and you misjudged the speed and his position on the road.

“I’m suggesting you were expecting him to be closer to the side of the road and you were so close to him, he had to come off the road and your passenger was aware of that and that was why she told you to stop.”

Luke Webb, forensic collision investigator, said that when he arrived on the scene he was told by police officers that Mr Richardson had collided with a tree. He said: “I was not able to identify the point of impact and there might not be a point of impact. Mr Richardson could have just fallen off his bike.

“It is possible that he became distracted by taking a drink and riding with one hand. He also could have been distracted by other vehicles driving by.”

He added that Mr Richardson had been riding at about 42 kmph.

Jack Macaulay, for Mr Pratt, said: “Everyone acknowledges that this is a tragedy and there’s no doubt about that.

“We have been talking about it in a mechanical way but that does not diminish that there’s a human at the heart of that.

“This is not a case about the generality of the relationship between cars and cyclists on British roads.”

Coroner Joanna Coleman said: “There are still a number of unanswered questions. Simon was a very experienced cyclist and prior to the incident he had been overtaken but there’s no evidence that he was struck by a vehicle.

“It’s possible that he became distracted as the overtaking took place but that is not clear.”

Speaking after the hearing, Mrs Richardson said: “The verdict is disappointing and anyone who knows anything about cycling knows that the story is not credible, the whole theory was confusing. As a cyclist myself, I feel that it is very common to get pushed off the road with people trying to overtake when it is dangerous.

“We know that is likely to happen but the police don’t seem to understand that it can happen so often.

“I think there needs to be more education and more training about the accidents that happen between cyclists and cars as often there’s no dashcam footage and it is very difficult to prove anything.”