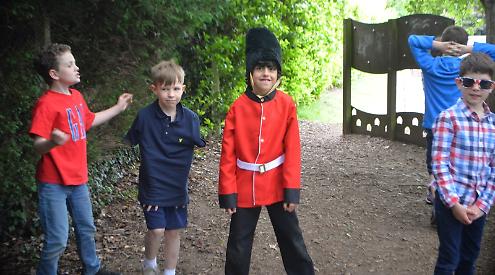 The fun included a treasure hunt, games and some original plays which the year six pupils organised for the younger children, including The Lost Corgi and The Queen’s Birthday.

There was also a “royal” disco with DJ Cameron Heriott, who is in year 6.

During the week, all year groups had learned about the history of the royal family and how the Queen had led the country for 70 years.

Year six teacher Caroline Lock, who dressed as Queen Elsa from Frozen, said: “At this time of the year, we encourage leadership, independence and teamwork from year six. They have just finished their key stage two exams and are preparing to move on to the next stage of their lives.

“With this project, they can work together and it shows them how far they’ve come with everything they created. They learned how tricky it is to organise and they had to be patient with one another. These are skills we want them to have for life.

“After covid, when the year groups were separated, it’s so wonderful to see everyone coming together.”

Headteacher Tim Coulson said: “It has been a lovely way to celebrate this unique day. The year six pupils organised some really fun events for the school and everyone made a huge effort to dress up in a unique way.”

At the end of the day, all the year groups met in the main hall to sing the National Anthem and wave their handmade Union flags.