Combined May holiday and jubilee celebration 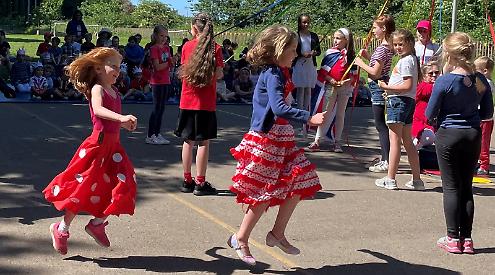 A MAY queen and king were crowned at Badgemore Primary School in Henley in a mixed celebration of the May holiday and the Queen’s platinum jubilee.

Year six students Robyn Mattingly and Freddie Docherty were chosen for the roles.

Robyn, 10, said: “I was very happy when I found out. Becoming May Queen in the same year as the platinum jubilee is amazing. The Queen has done such good things for the country — it’s special.

“In my speech I said that it was my last year at Badgemore and I wanted to make it count and that I hoped I could make everyone’s May fair great.”

Freddie, 11, said: “In my speech I said if I was king, I would be nice to everyone and if anyone needed something, I would help them.”

All the year groups took part in Maypole dancing and sang along to a medley of songs by The Beatles.

There was free ice cream for all the children, which was organised by parents, and refreshments for families.

Mayor Michelle Thomas, who attended the event, said: “It was such a lovely day seeing children enjoying themselves. The crowns were magnificent. I also loved the maypole dancing to modern music. The main thing was they were having fun.”

Headteacher Tim Hoskins said: “It’s great we could celebrate the Queen’s jubilee together with the May holiday.

“The staff put so much effort into this, arranging the food and taking lunchtimes out to practise the dancing. It was a team effort.

“I loved it and was so proud to watch the children and see the smiles on their faces and the parents enjoying it.”