Got that sinking feeling... 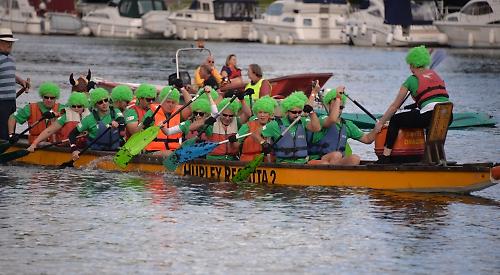 JIMMY HILL’S Beard was among the imaginative names given to teams taking part in the main race at Hurley regatta.

The self-built raft race is traditionally the final event of the fun regatta, which was held for the 45th year on Saturday.

There were 15 teams taking part and each one was given a kit including plastic containers, rope and wooden poles to create a raft on which to navigate the 500m course.

Unfortunately for the team paying homage to the late footballer and TV pundit, they failed to cross the line first.

Some of the other teams — with names Sink or Sims and Swish Swish Fish — ended up in the water when their home-made vessels fell apart.

The honours were taken for the fourth year running by the Hurley Hayseeds. Earlier in the afternoon, there were 53 races, featuring dongolas, dinghies, punts, canoes and dragon boats as well as some more unusual vessels.

There were 14 more races than last year with the addition of several new categories, mainly aimed at children. One of the new events was the children’s dongola 40, where the total age of the five children in the crew could not exceed 40.

The dragon boat event was contested by three 16-strong crews in a series of time trials throughout the day. The Dew Drop Pirates, a crew from the Dew Drop Inn in Honey Lane, Hurley, retained their title after beating The Vikings, who raced in green wigs, and Queen Mavis.

In the damsel in distress races, canoeists had to collect a “damsel” from a stake boat and take her to the finish safely. One competitor struggled to steer his canoe and became lodged on the riverbank before being pushed out in the right direction towards his damsel.

In the bathtub races, where the “boats” consisted of two baths lashed together with buoyancy aids, several competitors ended up in the water as the tubs filled with water and had to be helped out by safety boats. The winners were Bathy McBathFace. Richard Freebody, who runs Hurley boatbuilders Peter Freebody & Co, was the starter for all the races, just as his late father Peter was before his death in 2010. Away from the river, there were dog races, egg throwing, where competitors actually threw water-filled balloons, and a tug of war contest which was won by a team from the Rising Sun pub for the second year running.

There were also fairground rides and a land train run by Maidenhead Lions Club. Evening entertainment was provided by Dean Davis, quizmaster at the Rising Sun, and Irish folk singer Steve Carroll.

Martin Fry, chairman of the regatta, said: “It’s not very serious. For all the fun races and events people come together and enjoy themselves. The winner of each race doesn’t matter as much.

“I think all but two of the crews in the raft race managed to get their craft on to the river and completed the course. This event is very popular, as are the bath and damsel in distress races.”

The regatta was raising money for the Chiltern Centre for disabled children in Henley.