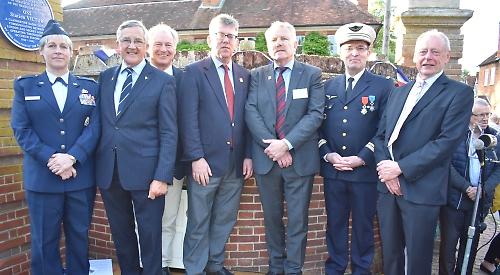 A PLAQUE has been installed to commemorate Hurley’s secret role in defeating the Nazis during the Second World War.

More than 300 people attended the unveiling ceremony at the gates to the manor house in High Street.

The house used to be the site of Station Victor, a base where America’s Office of Strategic Services’ communications branch ran agents in Nazi-occupied Europe as part of Operation Sussex.

The secret was discovered almost 70 years later by Phil Mullins, from Wargrave, when he joined the OSS Society.

He wrote a book about it called OSS Station Victor: Hurley's Secret War under his pen name Philip Williams in 2016.

Those present at the ceremony included members of the Hurley village association and history society as well as military officers from the American and French embassies in London and Sir Gerald Howarth, a former Conservative MP and defence minister.

The round blue plaque was unveiled from behind an American flag by Charles Pinck, president of the society, helped by Mr Mullins. The spectators applauded.

Mr Pinck said: “This is my first visit to Hurley. It is a beautiful and charming place. It’s obvious why the OSS chose it for Station Victor.

“I am honoured to be here representing the OSS Society. It’s fitting this ceremony is taking place two days before we commemorate the 75th anniversary of D-Day. Station Victor played a critical role in the invasion’s success.”

Sir Gerald, who grew up in Hurley, where his mother was the village historian for many years, said: “I would like to add my thanks to Charles Pinck and his team from the OSS Society for initiating this event and joining us at this historic time on the eve of the 75th anniversary of the D-Day landings to present this plaque as a permanent reminder of the contribution made to the liberation of Europe from Nazi tyranny by our American friends, based here in this idyllic, quiet Thames-side village of Hurley.”

He also read a message from Prime Minister Theresa May, the village’s MP.

It read: “I am sorry I shall be unable to join you in Hurley to mark the 75th anniversary of Station Victor’s contribution to the success of D-Day as I shall be receiving the President of the United States.

“However, I am delighted that, as the President and I mark those events elsewhere, my constituents in Hurley will be doing the same with the representatives of OSS visiting the UK. The work undertaken by Station Victor embodies the spirit of close intelligence and security co-operation between the UK and US, which was, is and will continue to be, the bedrock of our enduring relationship.”

Earlier in the day, an exhibition was held at the Tythe barn opposite the Olde Bell pub in High Street.

There was a screening of a documentary called Operation Sussex by Bonnie Sideman of the OSS Society and photographs of allied agents in Europe who sent information back to the station and a display from the Military Intelligence Museum in Chicksands in Bedfordshire.

Mr Mullins said: “It was wonderful to see so many people who had travelled far and wide to be with us at this unique and special event.

“I did it for the village. We all thought the Second World War had just passed by Hurley without any significant impact. It was a forgotten secret. Henley and Hurley were very, very important. It’s like the valley of secrets.”