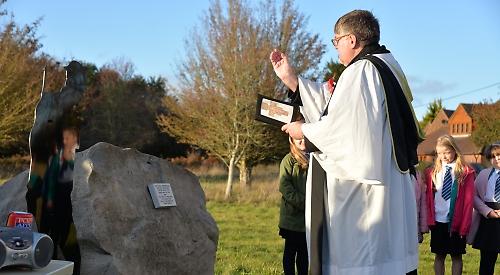 The stone, which weighs more than three tons, has been placed on Ibstone Common to mark the centenary of the end of the First World War.

The project was led by Ibstone Parish Council which wanted a natural tribute that would blend in with the rural surroundings rather than a more formal memorial or bench.

The Sarsen stone, which measures about 5ft x 4ft, was found at Aston Rowant nature reserve, near Stokenchurch, and donated by Natural England, which owns the land.

Crane driver Mick York drove it the six miles to the common, which is part of the Wormsley Estate, on the back of his flatbed lorry.

A plaque commemorating the soldiers has been attached to the stone.

After welcoming guests, he read a prayer before reading out the names of the fallen from both world wars. He then recited a verse from the Laurence Binyon poem For the Fallen.

The Last Post was played by Shiplake College pupil Bobby Howard-Jones. There was then a two-minute silence before he played Reveille.

The crowd then sang the hymn I Vow to Thee My Country.

Children from Ibstone Primary School sang It’s a Long Way to Tipperary before Rev Ackford led prayers, finishing with the Lord’s Prayer. Parish council chairman Richard Scott read John McCrae’s In Flanders Fields, before a closing prayer and blessing and the singing of the National Anthem.

After the ceremony, tea, coffee and cakes were served at the Fox Country Inn.

Councillor Grimsdale said: “We wanted something to be fitting with how rural and unspoilt Ibstone is so we didn’t want the usual bench or some structure. We wanted the tribute to be natural and everlasting, to be something that looked like it had always been there and something that the men could have actually passed as they left Ibstone for that last time to fight.

“We’re a very small council and we haven’t got a lot of money so finding the right stone proved to be quite difficult.”

In 2000, another Sarsen stone was erected on the common to mark the new millennium and Cllr Grimsdale said they wanted it to match.

After getting the go-ahead from the reserve and Patrick Maxwell, estate manager at Wormsley, Mr York was helped to put the stone in place by Cllr Grimsdale, her husband Mervyn and fellow councillor Michael Wright.

Cllr Grimsdale added: “It couldn’t be a better stone. I like the shape of it because from each angle it looks different.

“I have always felt it important that the sacrifices made in war are remembered and recognised. My granddad served as a private in the First World War in the Royal Berkshire Regiment.

“He was awarded the Military Medal for bravery. He rescued his commanding officer from no man’s land under fire.

“I believe he was 18 years old at the time. He would have been eligible to be conscripted to fight again for World War Two. He was actually terrified this would happen. He died, aged 39 or 40, in 1939/1940 when my mum was two.”

Mick Venters, senior reserve manager at the nature reserve, said the stone originally came from a cutting when the M40 was being built in the Seventies.

He said: “Melanie got in touch and said they were looking for something suitable, fitting and in keeping.

“This is such an important thing and it’s a privilege to be able to do something in some small way to remember people who gave everything.”