Olympian calls off Polar Row due to danger... and he misses family 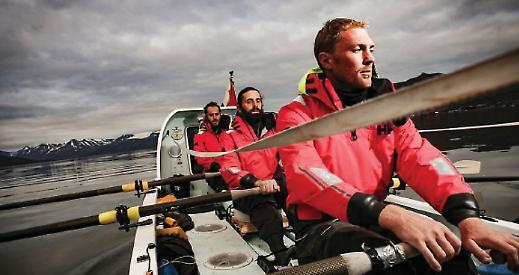 The two-time rowing gold medalist is stranded on the tiny island of Jan Mayen, about 370 miles north of Iceland, after being forced to stop due to extreme weather and technical problems.

He is part of the six-man Polar Row crew that was bidding to travel 2,000km from the island of Svalbard in Norway to Iceland.

Gregory, 33, said he did not want to take any more “serious risks” and wanted to return home to Ipsden to see his partner Emily Airey and three young children, Jasper, and Jesse.

“For I need to be alive,” he said. “I’m not heading out into rough Arctic waters in a rowing boat again.”

However, he does not know when he will be able to leave the island because planes are not allowed to land there so the crew to wait for a passing boat with enough space to evacuate them.

The crew departed on August 8 and went north for two days to the permanent Arctic ice-shelf, the furthest north any rowing crew has ever been, before going south.

They rowed day and night in groups of three doing 90-minute stints under a constantly overcast sky. There were five days of no sun at all and the crew forced to go on to power supply and three days later the batteries shut down.

The crew used only manual steering and no navigational aides for a short period before deciding to seek refuge on the volcanic island Jan Mayen on August 19. In total, they had more than 1,600km.

They hoped to recuperate and fix the technical issues before restarting the row but decided on Monday to end the challenge.

Gregory, who won gold in the coxless four at the 2012 and 2016 Olympics, said missing his daughter’s fourth birthday on Friday cemented his decision not to continue.

He said: “This decision has been both an easy one to make and an incredibly difficult one. It’s a difficult decision because I’m part of a team, a big team, team Polar Row. For stopping makes it more difficult for the boat to reach its destination of Iceland.

“We find ourselves on an island that is incredibly difficult to get on and off. We were lucky to find it and be allowed on but getting off is nearly impossible unless you’re prepared to stay for months!

“It’s an easy decision because I want to get home to my family. My three young children need their dad. They need him to be responsible and to make the right decisions in life.

“They need him to be brave, adventurous, ambitious and to set them the right example, but they also need him to not take unnecessary risks.

“Where there’s a chance, although slim, that he may not come home, the decision to stop has to be taken.”

Despite ending the challenge early, the Polar Row crew has still set 11 world records, which itself is a record for a man-powered expedition.

Gregory said he didn’t view the decision to stop as a failure.

He said: “I see this as a massive success, a success far greater in fact than I was expecting.

“We have done something together as a crew which is really exceptional. We have a whole load of world records and world firsts and we survived.

“The most important thing for me is that I now have an even greater and far deeper understanding of what my role is in the world, what I value and what I want.

“I’ve been so lucky, so, so incredibly lucky to have achieved what I have here and in previous sporting .

“Now what I want is to be with my children and give them some really cool, happy, fun and exciting life experiences and adventures.”

Gregory praised the hospitality he and his crewmates had received since arriving on Jan Mayen, home to only 18 people who are all members of Norwegian Armed Forces and the Norwegian Meteorological Institute.

He said: “If you ever come across anyone in need, help them. That is what these people have done for us.

“In all we needed or hoped for was a dry shed floor but we have been given everything - beds, food, safety, and friendship.

“The hospitality has been extraordinary on this remote volcanic island in the middle of the Greenland sea and it means so much to us.

“We have regained strength, I’m still suffering from the effect of cold on my feet but I see it as a small price to pay for the experiences I have had.”

Despite being stranded, Gregory is enjoying his time on the island, which he has been exploring with his crew mates.

He said: “This is a volcanic island with the northernmost active volcano on the planet. We have walked, cycled and been driven through moonscapes and hillsides covered in the softest, brightest green moss you can imagine.

“Volcanic peaks emerge through clouds of fog that shroud the whole island. We’ve been lucky enough to have been taken to some of the best parts of the island with caves, peaks, crashed Nazi planes and old fox trapper huts.”

Fiann Paul, the Polar Row skipper, had hoped to get other rowers out to the island to try to finish the last part of the challenge and reach Iceland but on Tuesday it was confirmed it would not be possible.

The challenge was split into two sections. The first part, from Tromso in Norway to the island of Svalbard, ended last month.

The crew raising £20,000 to build a school in the Himalayas. To donate, visit www.justgiving.com/crowdfunding/thepolarrow