Hat-trick of awards for farm shop 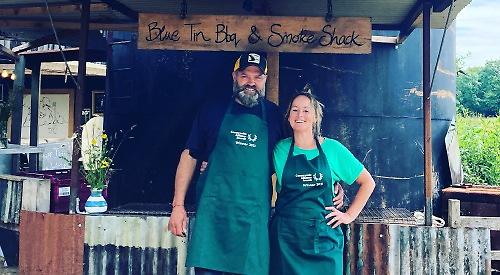 A FARM shop in Ipsden has won an award for the third time.

The business, which was launched by Jed Jackson and Emma Darke in 2009, is now in the running for the national title, which will be announced later in the summer.

The couple, who have two young sons, Jake and Johnny, founded the business because it seemed easier to create a shop at home than to take their meats to markets in the area.

In 2017, they expanded the original farm shop into a purpose-built facility with a café serving ramblers and cyclists. The business stayed open throughout the coronavirus pandemic.

The shop recently added a smokehouse which will sell smoked meats such as chorizo, biltong and bresaola made from their free-range animals including rare breed Dexter cattle and Gloucester Old Spot pigs.

The couple have also hosted a pop-up restaurant and vegetable garden yoga and are to hold a pop-cinema event.

Miss Darke said: “We’re so chuffed to win this award, which really is thanks to our amazing customers, family and friends who are unfailingly on board with what we’re trying to achieve.

“It’s like a big family where everybody is pleased for everyone. It’s fantastic to get recognition for doing something you love and it makes all that hard work worthwhile.”