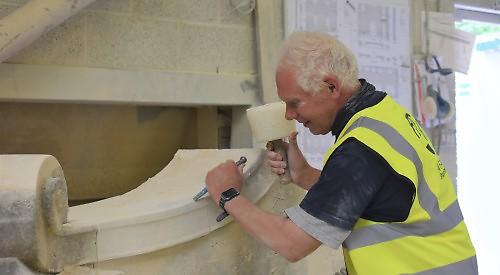 A STONEMASON who started his role in Ipsden at the age of 15 has retired after 49 years.

Jonny Griffin, who was the second generation of his family to work for A F Jones Stonemasons in Port Way on the A4074, retired early from the company on Friday, July 2.

The company, which specialises in architectural masonry, conservation and restoration and stone interiors, was founded 160 years ago by William Jones.

It is now run by the family’s fifth generation brothers Angus Jones, managing director, and Ken Jones, director. The brothers and other colleagues organised a retirement party for Mr Griffin in the yard of the stonemasons which included drinks, cake, snacks and a variety of leaving gifts.

The managing director thanked everyone for staying on after work to celebrate Mr Griffin and described him as a “one-off”.

Mr Griffin had worked under six yard managers starting with his own father, Ron, and under three generations of the Jones family.  “He represents perseverance,” Mr Jones said. “He’s very reliable. I don’t remember, until very recently, any days off that he’s had.

“He had to break his ankle to come to work. Through the years Jon has seen a development of technology  — he remembers when it was just hammer and chisels. I want you to really celebrate Jon and the time he’s spent with us as he epitomises the strength in our team.  Everybody works together in a team and Jon is very much a part of that team.”

Mr Griffin was then gifted a trophy and a smart watch by his colleagues.

Mr Jones then led everyone inside to Mr Griffin’s work station to reveal the new stone plaque installed on the wall in his honour, with the inscription: “The Griffin Banker Shop”. A banker shop is a masonry term for workshop.

Mr Griffin was pleased with his gifts and joked with his colleagues for the rest of his leaving party.