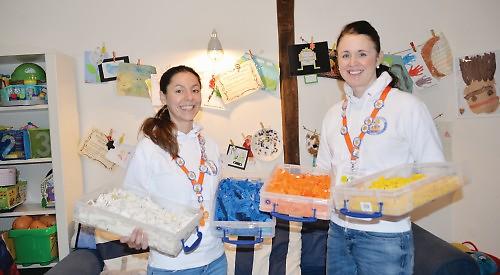 TWO mothers have launched a business inspired by their children’s love of Lego.

Clare Wright and Kate Winter, who are neighbours in Kidmore End and have three sons each, came up with the idea after seeing their boys happily playing together with the interlocking toy bricks.

Mrs Winter, 36, said: “We wanted to share the experience we had with our children. We were amazed by the play opportunities that Lego had given our sons and there was not a club like it in the area — there are sports and clubs for musical instruments but no Lego club.”

Mrs Winter, who moved to Kidmore End from Emmer Green in 2014, lives with her husband Tom, a carpenter, and their sons, Freddie, six, Woody, four, and three-month-old Monty.

Ms Wright lives with her partner Jeremy Havers, who works in IT, and their sons, Max, six, Harrison, four, and Luca, one.

The women have had first aid training and were checked by the Disclosure and Barring Service in order to be able to work in schools.

Mrs Winter said: “We are thrilled by how well it has taken off and wish we could give it more time.

“It has been a lot to deal with as we are both full-time mums.

“We’ve already gone as far as Oxford for a party and in the last six weeks we have done six parties plus two school workshops.”

Ms Wright added: “We have a lot of repeat business so that shows how much people enjoy it.”

The pair devised more than 50 workshops with different themes such as Lava Palava, Fantasy Kingdom and Christmas Catastrophe.

Often they run their ideas past their sons to see if they will be popular with other children.

Ms Wright said: “Most workshops are built around creating three things. We did a lot of research, looking into if anyone else had done it and how we could run ours. ” Mrs Winter added: “There was a lot of stuff online to help with ideas and seeing what was popular.

“There is also a big educational area on the Lego website. We decided to have badges like they give out at Legoland because children love to be rewarded.”

She said Lego was an “inclusive” toy, explaining: “We’ve found that children with learning difficulties can take part in this activity as much as any other child.”

The themed presentation for schools can be made to fit with the curriculum.

Mrs Winter said: “We write all the presentations ourselves. The way it works is the children come in, we tell them a story with a presentation on a projector and then what they build links to that story.

“We ran a session at Kidmore End Primary School based on Tudor times where the children made a horse and cart, something to protect you from a pack of wolves and a castle.

“We try to encourage the children and get them to take photos of themselves with what they’ve made because they can’t take it home. It’s a way for them to recognise their achievements.”

Parents are encouraged to share the images on the Master Builders Club Facebook page. The workshops involve more than 30 boxes of Lego with more than 10,000 pieces. For each session the women wear their specially made jumpers and
T-shirts bearing the company’s logo.

Ms Wright said the workshops appealed to both boys and girls.

She said: “There was a girl at one of the schools who had never played with Lego but she did the workshop, loved it and made some amazing models.

“It is creative and encourages children to play. Some of the ideas the children come up with are amazing.”

Mrs Winter said: “We keep really positive and help children who need it.”

The pair their business will grow organically but believe they could offer franchises in the future.

Mrs Winter said: “At the moment it’s just the two of us with family helping us out in the background by breaking up the Lego pieces after a workshop.

“My mum likes to have something to do in the evening and she puts them all the pieces in bags by colour.

“As well as franchising we want to be able to offer more school work but that needs to be based our own children.

“We could also look at taking on our own space at some point rather than using village halls and other spaces for parties.”

The next workshop will take place at Woodcote village hall tomorrow (Saturday) at and .

They also have plans for Easter holiday workshops in Kidmore End on April 10 and Woodcote on April 19.