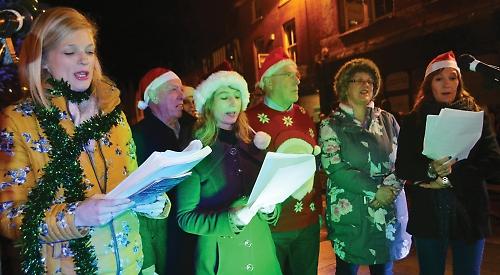 Members of the Henley Amateur Operatic and Dramatic Society sang a medley of festive tunes including White Christmas, Jingle Bells and Rudolph the Red-nosed Reindeer on the town hall steps.

Members of the audience joined in the half-hour show on Saturday evening.

The actors, who will be giving a performance of White Christmas at the Kenton Theatre next week, were the first performers in this year’s calendar, which is now in its eighth year.

The charity initiative, which is sponsored by Higgs Group, publishers of the Henley Standard, is taking place every evening in December until Christmas Eve.

Each night has a different performer and venue but the identity of the acts is kept secret until they appear.

Every show starts at 6.15pm, lasts 30 minutes and is dedicated to a charity or good cause, whose volunteers hold bucket collections.

HAODS chairwoman Sam Riley said: “We are honoured to have kicked it off this year. We do it most years, although we don’t usually have a show to promote. It was really nice and there was a good turnout.”

The evening raised £357 for the Royal British Legion’s Poppy Appeal.

There was a raffle with prizes including piano lessons, a ride in an amphibious vehicle and tickets to next year’s Henley Festival.

More than 100 people packed into the Finlay Suite to hear an uplifting set led by Ian Desmond and Bill Ford.

Tracks included Let Her Go by Passenger, Rocket Man by Elton John, Me & Julio by Paul Simon and Dakota by the Stereophonics.

The audience was served mulled wine, hot chocolate and stollen by the hosts.

Calendar organiser Richard Rodway said: “It was a terrific set from the band.

“Last year they performed in freezing conditions outdoors, so it was only fair that we brought them inside to this wonderful setting where they could actually feel their guitar strings.” The night was sponsored by Grey Matters Consultancy and after the performance the firm’s founder Caroline Romero thanked the band and the audience. A total of £290 was raised for Riverside Counselling.

On Monday, acoustic duo FidGit performed on the terrace at the Angel on the Bridge pub.

The pair, comprising violinist Peter Crowther and Mike Rowbottom on vocals, guitar and ukulele, played a mix of classic blues, jazz and rock ‘n’roll numbers and their own original songs.

Julie Huntington, of HAODS, donned a tricorn and joined them on stage to sing an original song called A Pirate Christmas Party about an office Christmas party on a river cruise that gets out of hand until the drunken revellers become the “scourge of the River Thames”.

Mrs Huntington put on an elaborate tiara and carried a staff covered in tinsel for a song called The Pantomime Dame about the pitfalls of appearing in panto.

During another number, she put on a glove puppet and made it dance and “sing” on Mr Rowbottom’s shoulder as he performed.

The evening was supported by the Copas Partnership and Lawlor’s bakers, of Henley, which jointly provided turkey rolls for guests, while the pub provided mulled wine.

The night raised £175, which will go to a project run by the Henley YMCA in Lawson Road to help young people find work.

Rosemary Duckett, who chairs the trustees, gave a short talk about the charity.

On Tuesday, the Thames Valley Chorus sang a mix of seasonal and traditional favourites on the steps of Leander Club.

Conducted by deputy director Alex De Bruin, they performed Ride the Chariot, I’ll Fly Away, You Raise Me Up and Billy Joel’s For the Longest Time.

The group then performed the Coventry Carol, a medley of White Christmas and The Secret of Christmas and I Want a Hippopotamus for Christmas in a nod to Leander’s hippo logo.

The event was sponsored by interior designer Niki Schäfer who introduced the act as Mr Rodway had a sore throat. She said: “He’s feeling a little hoarse, or should I say a little hippo?”

Visitors were served mulled wine and mince pies on arrival, and there were fire pits to keep them warm.

The evening was raising money for the Henley Youth Festival.

Hundreds of people attended the first few performance and Mr Rodway said he was pleased the calendar had got off to a good start.

He said: “We’ve had good audience numbers, with great spirit and generosity so far. In terms of fund-raising we are a little down on last year and probably more on par with the year before.

“The first three days last year started with the Christmas Festival on the Friday and then went into the weekend where there is greater footfall. This year we weren’t part of the festival.

“The important thing for me is the feedback we are getting. We have had great performers and really enthusiastic audiences.”