Debbie's back on top form 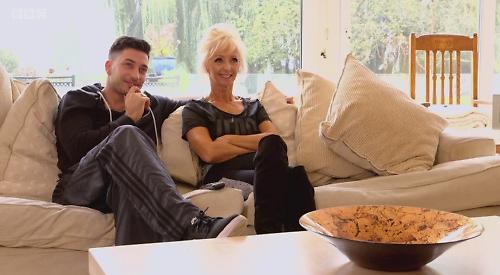 DEBBIE McGEE is back in the running to win Strictly Come Dancing after she topped the leaderboard for the second time.

The radio presenter made one judge fall off his podium with delight during Saturday’s live show in week five of the BBC 1 series.

McGee took to the stage wearing a flowing white, black and silver ankle-length dress which split in half from the waist down.

She and her professional dance partner Giovanni Pernice performed a romantic rumba set to Tracy Chapman’s Baby Can I Hold You.

She wrapped her leg tightly around Pernice several times during the routine and executed a number of kicks and spins.

The pair repeatedly embraced and finished standing apart but facing each other. They were awarded nine out of 10 by each of the three judges, propelling them into first place.

It was an emotional moment for McGee, who earlier in the week had been reminiscing about her 17-year marriage to magician Paul Daniels, who died in March last year.

Pernice visited her at home in Wargrave and they watched footage of the couple’s wedding in 1988 as well as clips from Daniels’s TV shows with McGee as his assistant.

Judge Shirley Ballas told McGee: “It was very emotional and I’m sure you were dancing for your husband. I have lost a loved one and know how it feels to perform something so beautiful as you have just done.

“You had no baubles, bangles or beads in that — you chose basic figures with one or two highlights. I’ve travelled the world for Dancing With The Stars and Strictly and I’ve never seen a standing leg as beautifully straight as yours. You were beautifully balanced and beautifully poised. I applaud you.”

He then toppled backwards and had to be helped to his feet after losing his balance while making “kissing” motions with both arms.

Darcey Bussell said: “I agree with Craig, though I’m not going to imitate that! It was wonderful how you caressed the floor with your feet. The resistance and your leg line were superb... it’s your best dance yet.”

It was a big improvement on the previous week’s show, when the pair were placed seventh after McGee was criticised for being “stiff” during a cha cha cha routine.

Co-host Claudia Winkleman said few contestants enjoyed the rumba because of its difficulty but McGee replied: “I loved it. I loved Giovanni’s choreography and he really worked me at it. I’ve been walking down the supermarket aisles practising my rumba hips.”

While watching the footage of her late husband, she said: “He was a real showman and I loved it so much every time we worked together on stage. This brings back happy memories and I feel lucky that I had an amazing life with him.”

Pernice laughed when Daniels uttered his catchphrase “you’ll like this — not a lot, but you’ll like it” and said: “I can see that he wasn’t just a magician, he was a performer.”

McGee also topped the leaderboard in the second week of the competition, when she and Pernice performed a Viennese waltz.

Speaking on her show on BBC Radio Berkshire on Sunday, she said: “It was really, really difficult and when I watched it back this morning I still think I was a bit more wooden than I would have liked. However, I’m not complaining as I did my best and everybody loved it. It was a great night and my best one on Strictly so far. It was magical.

“I knew I had to be relaxed so when they announced my name I deliberately tensed up, which meant I could breathe out and relax as Giovanni came towards me.

“I wasn’t thinking about how it was going but was focused completely on the dance and didn’t let my brain think about anything other than the steps. I was totally absorbed and it was like nothing else existed. I felt good but had no idea I’d done so well and really wasn’t expecting those nines as they say it’s very difficult and I was warned that Shirley would be a real stickler.”

McGee said she had been thinking a lot about her late husband after watching a TV tribute called Paul Daniels: My Life In Magic.

She said: “I was really struggling because the tribute brought all my feelings and memories to the fore but Giovanni was totally there for me and got me through the worst bits.

“It was as if I channelled everything I’ve been through in the last few weeks into that dance and I woke up in a really happy mood this morning.”

On Sunday’s TV show, entertainer Brian Conley was voted off following a dance-off in which he and partner Amy Dowden performed a jive.

In this weekend’s Halloween special show, Debbie will be dancing the Charleston to Sister Sledge’s Frankie.