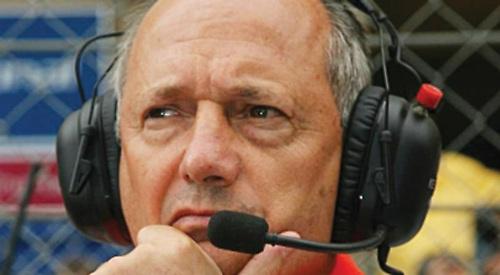 The 70-year-old, who currently lives in Virginia Water in Surrey, bought 175 acres of land in the summer after selling his 25 stake in the McLaren Technology Group for £275 million.

Now Dennis has applied for planning permission for a new U-shaped house with three storeys and a basement.

He also wants to build a new gatehouse and accommodation for staff, which would be joined to the two wings of the main house by a tunnel.

The house would have six bedrooms, a roof terrace and a large mezzanine with a spiral staircase as well as a large reflective pool at the front of the building.

The basement would contain kitchens, wine cellars and offices for staff as well as a games room, cinema and swimming pool.

The application says: “The proposed building would be an elegant country house built to a high standard of design and environmental performance.”

John Bateman, of Spink Property, is working with Dennis on the plans.

Speaking at a meeting of Wargrave Parish Council, he said: “We are pleased to be working with the final occupier and there will be three more applications in the next month or so which will tie up the whole area. They will all be tied to the house and can’t be sold off separately.

“There have been a number of large houses designed and consented on that plot in the last seven years.

“The new owner is very keen on Foster & Partners and they have come up with a variant of what has been done previously.”

The main access to the house would be from Culham Lane, via an existing driveway originally used to access the car park of an old golf club.

There would be another entrance for staff and deliveries on Lane, next to the staff accommodation, Parish councillors said they were concerned about the impact of this access.

Councillor Philip Davies said: “The main gatehouse is not going to be used much — this is going to be the main in and out for people and goods. That would be my main concern.

“It’s not very clear from these plans where the entry and exit lines are on Lane. That lane would be wrecked in short order.”

Mr Bateman said they could consider creating a larger exit further along the road.

Chairman Richard Bush said: “The entrance with the wooden gates further down might be better. The rest of it is all things we’ve looked at before in one form or another and we had no real problem with those.”

Councillors had no objections to the house or gatehouse but raised concerns about the Lane access.

They said: “The proposed entrance and exit and traffic movements along Lane are considered to be detrimental to highway safety.”

Developer Michael Spink sold Park Place and 40 of the 500-acre estate for a £140 million in 2011 after spending four years renovating and modernising the property, which is Grade II listed and about 300 years old. The buyer was Andrey Borodin, who was chief executive of the Bank of Moscow but fled Russia in 2011 after being accused of fraud and was granted political asylum in 2013.

Mr Dennis’s purchase from Spink Construction was revealed in documents filed at Companies House by Abelo Estates, which he owns.

Spink says this application is for a third and final home on the old estate, which the company in 2007.

The properties are all part of a “master plan” following consultation with Historic England and Wokingham Borough Council, the planning authority.