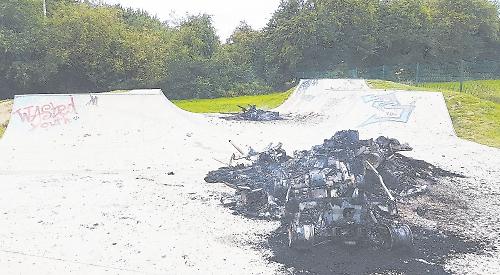 POLICE have been accused of failing to investigate a serious crime because they “can’t be bothered”.

The attack on Thames Valley Police was made by the parish clerk for Sonning Common following an incident in which vandals stole four buggies from a golf club and then set them on fire at the village’s skate park, causing a total of about £37,000 in damage.

• The police had made no effort to contact any of the victims until they were prompted more than two weeks after the incident.

• No one had been to check the crime scenes for fingerprints.

• Evidence had been waiting for more than three weeks to be collected.

Collings said: “The problem is they have been doing diddly squat since this was reported. They just want to give out a crime number and assume everything is covered by insurance. Their at present suggests they can’t be bothered. It falls into the same category as thefts from farms and things like that — it’s too much like hard work to get off their a***s and do anything.

“We have a situation where one of the largest crimes not involving injury to persons to happen in this area has gone completely uninvestigated by anyone with a scintilla of training in criminal investigation and with no managerial concern for the outcome.”

The incident happened during the early hours of August 2 when a gang of joyriders broke into Caversham Heath Golf Club, near Mapledurham, and stole three golf buggies which they used to smash through a fence and then drove about three miles to the skate park at Bishopswood recreation ground.

There, they used the machines to smash down fencing, destroy benches and rip litter bins from their concrete bases
everything on fire. Four football goals were also wrecked.

Another buggy was found damaged and abandoned in woodland nearby and two more were left at the club badly damaged.

Robert Wytchard, Mapledurham estate manager, which includes the golf course, found bicycles left at the club and reported this to the police later the same day but has heard nothing since.

He said: “We told the police there were a couple of left on the day of the incident and they told me to put on rubber gloves and put them somewhere safe as they could be useful for fingerprints.

“We have still got the bikes here but they are taking up room in the greenkeeper’s shed so we are going to put them in the skip because the police can’t be bothered to come out.

“They could have at least made a phone call asking us to keep the bikes as they were useful but nobody has done that or been out to us. Their non-attendance is disappointing.”

The incident has cost the golf club about £25,000 for replacement buggies and repairs.

Wytchard added: “I know the police are busy and their budgets are being cut but we didn’t even get a phone call to acknowledge they were looking into it.

“Had this been a shop in the middle of Henley they would probably have been all over it like a rash but because it is out here it is not in the public eye.

“We don’t expect a patrol car to go past every day but when something does happen it would be courteous to ring or turn up to do something. The fact is we feel abandoned.”

Collings, who has complained to Thames Valley police and crime commissioner Anthony Stansfeld, said he assumed were investigating the incident.

However, he heard nothing more until he received an email alert last Friday, so he sent an email to Insp Mark Harling, head of the Henley police area, to ask what progress had been made.

He said: “His reply shortly was to copy me on an email to two subordinates which said ‘could someone make contact with the clerk and let him know the answers to his points please’. Not encouraging.”

“Later Sgt [Steve] Bobbett rang and, seemingly annoyed, said that he would the PCSO to make house-to-house along the route used by the miscreants to see if any residents had seen/heard anything on the night or had any CCTV from that night, now three weeks old!

“He also gave us the impression that he was unaware of the number of crimes involved or the cost of the damage.”

Sonning Common Parish Council has spent more than £6,000 on repairs to the skate park, which re-opened for the first time since the incident on Sunday, and replacement fences and bins.

Collings, a former company executive, said: “This council has always bent over to assist the police, including setting up a significant CCTV system in the village and providing Thames Valley Police with technical support using it and now preparing to supply, gratis, storage space for police cycles.

“Thus this fiasco comes as a complete betrayal and leaves people wondering if there is any point in being so supportive when it is clearly a one-way street.”

Councillor Dirk Jones, who runs the village’s CCTV system, said: “Do Thames Valley Police think this £35,000 multiple buggy , gross vandalism and arson of a skate park was a mere ASBO squabble over a packet of funny cigarettes and who can drive a golf cart better?

“They seem to think that handing out crime reference numbers like confetti passes the buck over to insurance companies to investigate.”

Carole Lewis, who chairs the council, said: “We try to look after our village and we have a very active parish council with a lot of support from people in the village.

“When we really need the police to help us, they have been conspicuous by their absence.”

“Subsequently house-to-house have been carried out and into potential CCTV are being investigated.”