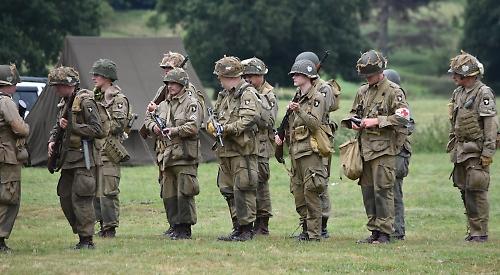 GUNFIRE and explosions rang out around Mapledurham as the village hosted a weekend of Second World War battle
re-enactments.

More than 6,000 visitors attended the sixth annual Mapledurham at War event, which took place in the grounds of Mapledurham House on Saturday and Sunday.

More than 600 enthusiasts took part in staged displays while playing the part of British, American and German troops.

They wore original uniforms and carried authentic rifles as well as props such as grenades.

There were two battles on both days, the first of which involved German soldiers storming the estate’s watermill, which featured in the 1976 film The Eagle Has Landed, and taking Allied soldiers hostage.

Another group of Allies then arrived and drove the Germans back into the woods.

They fired blank ammunition which made the same noise as live bullets and several explosions were set off in the mill pond to simulate mortar strikes.

In the second battle Allied troops drove Germans into retreat across open countryside.

This featured a number of restored Second World War vehicles, including two M8 Greyhound armoured cars, one of which had a gunner standing atop the turret firing a machine gun.

Dave Allaway, one of the organisers, said the event attracted more spectators than in previous years thanks to being held later in the year than normal and not during school holidays.

He said: “It was an outstanding success and beyond expectations. The weather was a major contributing factor in that it wasn’t wet and or too hot but just right and it’s a beautiful setting by the Thames.

“We’ve got the Mapledurham at War veterans and they just add to the ambience and atmosphere. They talk to the public, they look great and they have a great time and it reflects in the end result.”

Other attractions included a Sherman tank that appeared in the Brad Pitt film Fury and is owned by Nigel Stoate, the joint organiser of the weekend.

There were more than 100 army vehicles, including trucks and cars, on display including two wartime amphibious jeeps.

A Dunkirk Little Ship which rescued more than 2,500 troops was moored by the the house and there was fly-past by a Spitfire from the Battle of Britain Memorial Flight on Saturday. Christine Wallace, who appeared on the 2013 series of the BBC’s Great British Bake Off, gave a workshop on baking and there were performances by Forties-style singers and dancing in a marquee.

Mr Allaway added: “It’s not all war or military. There’s music and an element of the Home Guard and civilian life too.

“It’s keeping the history alive as the Second World War must not be forgotten. It’s very easy these days to brush it to one side and say ‘that was a long time ago, we don’t need to worry about that’ but we’re still living with the impact of that conflict.

The event was first staged by the Mapledurham Estate in 2013 and used to take place over the Easter weekend. The estate was not going to run it this year so a group of enthusiasts stepped in.