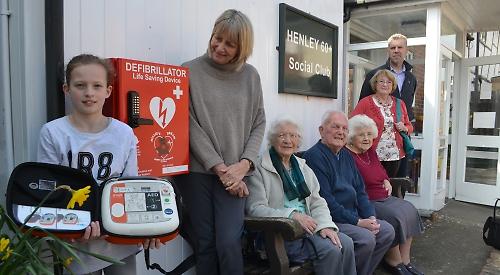 A DEFIBRILLATOR has been installed at the Henley 60+ Club.

The lifesaving device is on the outside of the building in Greys Road car park so it can be used by the community.

It is the 54th defibrillator to be installed by the Millie’s Dream appeal, which was founded by Sarah Roberts, of King’s Road, Henley, and named after her daughter Millie, 10, who has a heart and lung condition.

The £1,500 device was donated by the charitable foundation run by pump manufacturer Stuart Turner, which is based in Greys Road.

Rosemary Musselwhite, a member of the club, suggested installing a defibrillator and former mayor Elizabeth Hodgkin approached the company.

Gill Dodds, who chairs the club’s management committee, said: “We are very grateful to Stuart Turner for funding the defibrillator. It’s a perfect location as we are very central in Henley and do have frail and elderly people here. Hopefully, we will never have to use it.”

Paul Manning, Stuart Turner’s business development director, said: “We offer assistance through grants to anyone in the RG9 area and when Elizabeth wrote to us we thought it would be a worthy cause to support.”

Millie’s Dream was founded in 2014 and originally aimed to install about 12 defibrillators in schools in and around Henley.

Miss Roberts said: “This is our 54th defibrillator and it’s in an absolutely perfect location for the elderly population and users of the car park and surrounding area. I’m absolutely thrilled at the continuing fantastic support from the Henley community and the Henley Standard.”

Miss Roberts said the charity was now seeking funds to pay for the maintenance of defibrillators as it costs £100 to replace the electrodes and batteries.

She also appealed for volunteers who could help inspect devices two or three times a year.

“It’s paramount that they are in good working order,” she said.