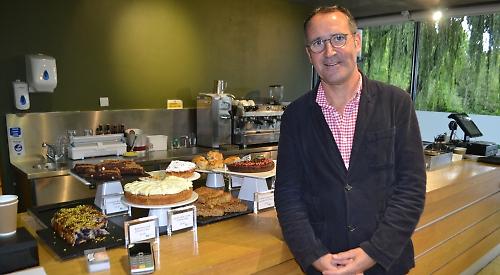 THE new man in charge of the café at the River & Rowing Museum in Henley says he is confident of success.

Catering company Leafi has taken over the café after the previous operators Wild Fork left after just seven months.

The café was closed for a few days while the changeover took place but the existing staff have been retained.

Rod Kemp, one of three directors of Leafi said: “It’s always challenging to get going again when a café has been closed for a few days but we had a fantastic Saturday and we are very excited.

“We know this works because we’ve been doing it for 20 years. We’ve looked at the numbers coming through the museum and also the non-museum visitors and we are very confident.”

Leafi is an independent catering company with cafés and restaurants at London venues including the Courtauld Gallery, the Turner Contemporary Gallery and St John’s Smith Square.

Mr Kemp said: “We are a specialist for museums and galleries. Our ethos is to keep it simple and everything is made on site, including our signature cakes. We use lots of local suppliers and will have loose leaf tea.

“Events are also a big part of what we do and there’s a space here where we can deliver weddings, conferences and parties.

“We specialise in places which are aesthetically pleasing and what we love about Henley is the outside space and the lovely views.”

Wild Fork, which is based in West Berkshire, took over the café in February but agreed to end its partnership with the museum in order to focus on its wedding and events business.

The café was previously run by the Quince Tree, which announced in October that it would be leaving after two years, claiming it was struggling to make a profit.