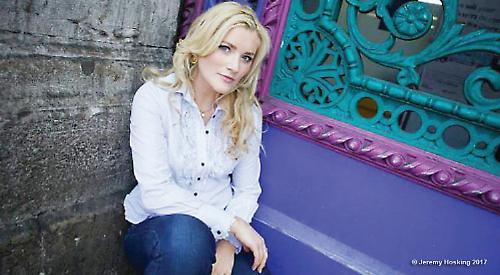 THE soloist playing the Queen of Carthage in Henley Choral Society’s forthcoming production of Henry Purcell’s Dido and Aeneas can hardly wait to get to grips with her character.

She ended up taking home the first prize together with the president’s master class award.

As part of the first prize she will be attending the International Bayreuth Scholarship Programme in Bayreuth, Germany, in August this year.

Both singers have been signed up to perform in Dido and Aeneas at St Mary’s Church on Saturday, March 25 — when Mae will be taking the role of the Sorceress.

The choir and the soloists will be accompanied on the night by the Brandenburg Sinfonia, regarded as one of the most versatile musical organisations in the country.

Based on book four of Virgil’s Aeneid and composed no later than 1688, Dido and Aeneas was Purcell’s only true opera — as well as his only all-sung dramatic work.

It chronicles the love of Dido, Queen of Carthage, for the Trojan hero Aeneas, and her despair when he abandons her.

For Samantha, the role’s appeal is pretty straightforward.

“I love strong women,” she says. “Dido was a female ruler in a male-dominated society. In Virgil’s story Aeneid, Dido’s brother Pygmalion kills her husband Sychaes to steal her inheritance and keep the throne, leaving Dido to flee for safety in new lands.

“The conflict Dido faces as she makes herself vulnerable to loving Aeneas after what she has been through is what I find interesting about her. She does not sit around waiting to be rescued, she chooses her own lover and ultimately her way to end the relationship.

“Dido faces pressures of leadership, hope, love, lust, excitement, betrayal, hate, confusion and peace. Purcell has captured this human expression in his composition beautifully, which makes his music a delight to sing.”

With three female soloists to one male, there is a strong female presence in what is one of the earliest known English operas and an acknowledged masterpiece of the Baroque form.

As it turns out, the three women are well known to each other.

“Mae and Lauren are both friends of mine from our student days at
the Guildhall School of Music,”
says Samantha. “Mae and I
have also been colleagues,
working on Jonathan
Kent’s production of The
Turn of the Screw at
Glyndebourne.

“Lauren and I have
performed opposite
each other as
Barbarina and
Countess in The
Marriage of Figaro at
the Guildhall, and as
Ilia and Elettra in
Idomeneo at the
Théâtre municipal de
Fontainebleau.

“It is a real
pleasure to work
with my friends
again as our
voices have
their own
distinct colours, but also blend well together in ensembles.

“We will be preparing at rehearsals in London with conductor, Peter Asprey, before the performance in Henley. This gives us the chance to delve a little deeper into our characters and play off what each of us brings to our roles. There will be a fantastic energy on the night!

“I am very much looking forward to singing Dido with Henley Choral Society and the Brandenburg Sinfonia.”

For his part, director of music Peter Asprey is looking forward to seeing how his chosen soloists bounce off each other.

Samantha, of course, has been party to quite a number of such evenings over the course of her career. But does she have any that she regards as her most memorable singing performances?

“It’s hard to pick just one!” she exclaims. “Schloss Schönbrunn is a beautiful Viennese palace that still houses its original royal theatre, once owned by the Habsburg family. When Wolfgang Amadeus Mozart was touring as a piano prodigy he was invited to perform at Schönbrunn for the Habsburgs.

“It made for a very memorable summer evening when I was invited to perform some of Mozart’s own works on that stage. Performing where masters of their craft have gone before you inspires me to improve my craft every time I stand up to sing.

“However, I also have to say that every opening night of a new opera is memorable for a host of different reasons. There is usually such energy, comradery, excitement and the element of ‘live theatre’ that keeps these wonderful experiences hard to forget.”

Looking ahead to next Saturday, choral society chairman Susan Edwards added: “The evening will be one of exceptionally beautiful music from Purcell’s Dido and Aeneas that includes cackling witches and drunken sailors as well as the heart-wrenching emotional dying lament of Dido to Vivaldi’s sacred music.”

n WEST Forest Sinfonia will be concert at St Paul’s Church in Readig Road, Wokingham, on the afternoon of Sunday, March 26 — the day after Henley Choral Society’s performance. Conducted by Philip Ellis, they return to the venue for a concert of British and American string music, but with woodwind, harp and piano involvement. The concert starts at 4.30pm and tickets are £15 with adult concessions £14 and students and under-18s £2.50. To book, email tickets@westforestsinfonia.org