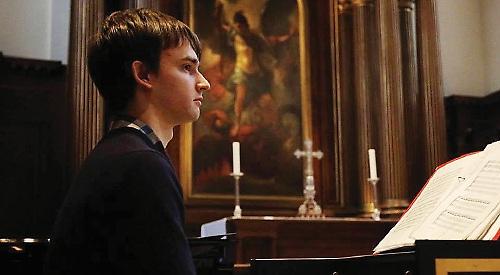 SATURDAY’S spring concert by Reading Youth Orchestra in Reading University’s Great Hall turned out to be an extraordinarily momentous and emotional event — as 21-year-old Henley pianist and one-time RYO cellist Edward Reeve carried off a masterful performance of Rachmaninov’s Piano Concerto No2 with all the authority of a seasoned virtuoso.

Completing the line-up from Henley were members of Henley Youth Chamber Orchestra, invited to join the RYO for this concert. The RYO emulated Reeve’s rise to new heights.

First came Sibelius’s Finlandia, a feisty curtain-raiser in which conductor Paul Cox pulled no punches. Guest adult brass and horns lifted the piece at its moments of greatest excitement, while Thomas Freedman was as courageous as he was accurate with his thunderous timpani rolls.

A talented young woodwind cohort acquitted themselves beautifully in the main theme, ably complemented by the strings — although the latter, generally the youngest of the players, were unavoidably overwhelmed by the power of the brass. However, this did not detract from a satisfying performance.

Edward Reeve’s choice of Rachmaninov’s monumental concerto was a defining moment for those in the audience who had witnessed his progress year on year at the Henley Youth Festival. Much credit is due to the HYF for providing a platform for such talent to develop.

Whatever the expectations of this Cambridge University organ scholar and music undergraduate, they were dramatically exceeded by his electrifying playing. Not only was there passion and power in the forte passages and beautiful phrasing of myriad melodies, but also total clarity of line as he brought out the important elements of dialogue with the orchestra.

Closely attentive to the orchestral accompaniment, he simply duetted as if performing chamber music. And there was never a hint of his not having mastered the work’s technical complexity.

The orchestra were equally empathetic in all departments with, again, impressive woodwind solos and ensemble passages. Throughout, Paul Cox’s direction was alert to Reeve’s rubatos and accelerandos.

The slow movement was especially moving and brought lumps to the throat. The final movement raced along demonically, ending on a high that took the audience by storm.

Post-interval, it was the turn of another RYO alumnus, Alex Illingworth, who had composed Symphony in C minor (“Sehnsucht”) for the orchestra.

In the style of Beethoven, and relatively lightweight alongside the Rachmaninov, it was appropriately accessible for the younger orchestra members, being fresh, lively and tuneful. And though stylistically 18th century, it was not in any way plagiaristic.

What Illingworth can achieve with a language more his own will be interesting to see.

Many congratulations to Paul Cox, Edward Reeve, Alex Illingworth and the RYO on their fantastic achievement. What next, we ask?