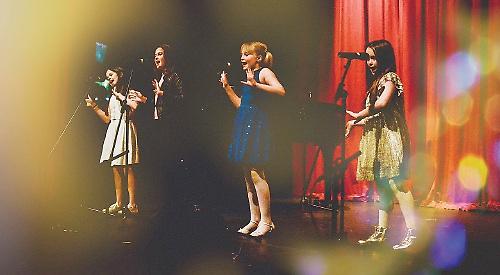 THIS event put the spotlight on the singing talent of local children.

A capacity audience was treated to a programme full of delights, covering a range of music sung by very small children to young teenagers.

The evening got under way with the large junior section of the Henley Youth Choir (HYC) singing three contrasting songs beautifully and managing some difficult part-singing.

The rest of the first half comprised solos, lots of brave little ones with big voices, a couple of lovely duos and two great groups — The Nice Girls and The Geeks.

All acts deserved the enthusiastic applause, but for many the outstanding solo performance was by Lucy Beesley, who sang Quiet by Tim Minchin with such skill, musical control of notes, timing and sensitivity.

The senior section of the HYC opened the second half, singing a traditional spiritual with a solo by Zosia Lewis, followed by Karl Jenkins’ Adiemus and then an upbeat Duke Ellington number.

The song Titanium was popular. Matilda Macartney sang a terrific version in the first half and in the second half the duo of Eleanor Whittle (voice) and Ria Mooney Nyangiti (piano) was equally outstanding.

Senior and junior members of the HYC filled the stage for the closing numbers of the show — a children’s song by Benjamin Britten and finally a song written by a member of the youth choir. How impressive!

The evening was a great showcase for all, including the very successful HYC under the direction of Peter Asprey, its talented musical director. Peter and the HYC’s regular accompanist, Anita D’Attellis, were the specialist advisers for the evening, providing written feedback for all of the acts. Pianist Darius Halpern accompanied other soloists.

There was a small army behind the scenes — a stage manager, stagehands, runners, fixers, lighting controllers and volunteers, who ensured that all ran smoothly.

Peter Asprey ended the evening by congratulating all who had performed and complimented them on their clarity of presentation and “owning” the songs they sang.

Jo Dickson and Fi Harding, the organisers of the event, deserve great praise and many thanks for showcasing the singing talents of so many Henley children.