Thanks for the tea party, Tony, say pensioners 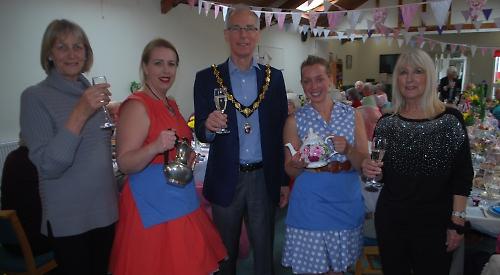 The Henley 60+ Club hosted the event, which included live music and an appearance by Mayor Julian Brookes.

Guests were seated on two long tables and were served tea, cakes and sandwiches made by Charlotte Cavanagh of Time for Tea.

Gill Dodds, who chairs the club’s management committee, led a toast to Mr Lane, who died in 2014, before she and the Mayor gave speeches. Pianist Ben Waters played singalong songs including Blueberry Hill and When The Saints Go Marching In.

The event was funded by a £1,000 donation from the Anthony (Tony) Lane Foundation, a charitable trust set up to donate money to community groups and voluntary organisations.

Mrs Dodds said: “We contacted the foundation and explained how Tony enjoyed coming here and they came back with the suggestion that we could have a tea party in his name. We will also be applying for a grant to help towards the running of the club.”

He was living at the Acacia Lodge care home in Quebec Road, Henley, when he died, aged 87.

Community , clubs and associations , over 60\'s