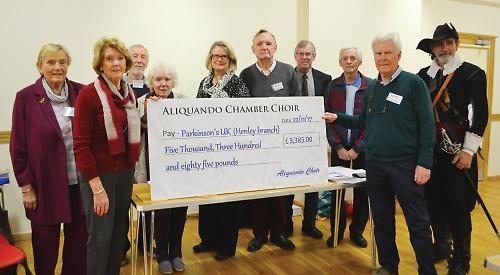 THR Henley branch of Parkinson’s UK received a donation of £5,385.55 from a charity concert.

The Aliquando Chamber Choir raised the money at a concert at St Mary’s Church in Henley on November 4.

The cheque was presented to Dr Terry Dudeney, chairman of the Henley branch, by Anne McDowell, Martin Goodier and Anne Evans from the choir, at the branch’s monthly meeting.

Members of the branch attended the concert and shook buckets for donations.

Dr Dudeney, from Rotherfield Greys, said: “We were privileged to be the beneficiaries of a wonderful concert at St Mary’s.

“Those who attended will agree with me that it was the most wonderful concert.

“It was superb in all aspects and I have to thank the committee for the hard work they put into arranging it.”

Mrs Evans, musical director of the choir, said: “It’s a great pleasure to be able to present this cheque.”

Town councillor David Eggleton, who also attended the concert, gave a talk to the group about Henley and the civil war while dressed as a cavalier from the 1600s.

He donated his speaker’s fee to a dementia charity.

The Henley branch of Parkinson’s UK meets at the Christ Church Centre in Reading Road, Henley, on the fourth Wednesday of every month, except August and December, from 10.30am to 12.30pm