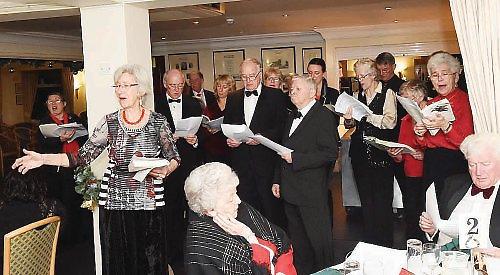 THE Henley Carol Singers raised £2,000 for the Thames Valley Air Ambulance over the Christmas period.

They performed at eight concerts and Christmas parties for organisations including the River Thames Society, the Rotary Club of Henley Bridge and Henley Lions Club.

They also sang at a Christmas dinner for the visually impaired and at the Golden Ball pub-restaurant in Lower Assendon twice.

The singers, who are all members of local church choirs or the Henley Choral Society, have been performing together at Christmas time for charity for more than 20 years.

Co-ordinator Judy Whittaker said: “The same group get together each Christmas and do a number of dinners. This year we had a flu outbreak which meant numbers were down but they are all experienced singers.”

Clare Allen, events fund-raising manager for the Thames Valley Air Ambulance, thanked the singers and those who contributed. She said: “It’s always amazing how generous people are, especially around Christmas.”