Strauss’s last opera is a ‘whim whim’ for Wormsley festival 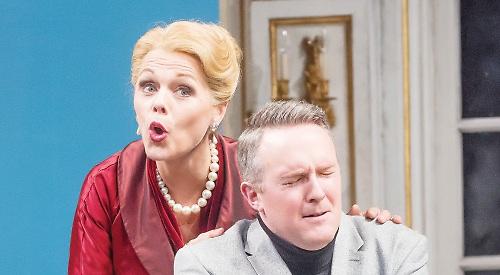 YOU know that summer has really arrived once Garsington Opera has opened at Wormsley.

The 2018 season began last Thursday with Mozart’s Die Zauberflöte — the first in a trilogy of “final operas” being performed this year, alongside Verdi’s Falstaff and Strauss’s Capriccio.

In contrast, Garsington’s newly commissioned work, The Skating Rink by David Sawer and Rory Mullarkey, has its world premiere on Thursday, July 5.

If the weather is fine it is sensible to arrive early in order to savour the afternoon’s extra delights — tea in the pavilion overlooking the immaculate cricket ground or a ride on the vintage bus to the 18th century walled gardens. There are also panoramic views to enjoy from the champagne bar across the whole Wormsley estate and peaceful strolls by the lakeside and deer park.

Capriccio is a new production by Tim Albery in collaboration with Santa Fe Opera. The second performance took place on Sunday, an afternoon and evening bathed in glorious sunshine. Shafts of light filtering through the auditorium, together with the rustling of trees and birdsong blending into the music, makes for a very special experience.

Capriccio premiered in 1942 and was originally a one-act work, lasting nearly two and a half hours. An interval was introduced in 1957 in order to gain more favour with audiences. In Strauss’s own words it is “a conversation piece for music” and without doubt it is light-hearted in spirit, designed to entertain.

The central theme rests on the question of whether it is words or music that are most important. The setting is a country house belonging to the wealthy patron, Countess Madeleine, who is hosting a gathering of artists as they design a theatrical celebration for her birthday.

The two characters competing for her love, poet Olivier and composer Flambard, each claim the supremacy of their respective art forms. The countess, elegant in red satin, takes an ardent, yet diplomatic role in the debate, at one point saying: “Beautiful thoughts graced by noble melody — could there be a finer union?”

There is little mistaking Strauss’s preference. Despite the eloquence and witticism of the libretto, the music wins every time; the orchestration is rich, the lines are hugely expansive and the Garsington Orchestra played their hearts out as the music surged onwards and upwards. In fact, you might argue that some of the best music happens during the orchestral interludes, as heard in the Mondscheinmusik — what beautiful playing from the horn soloist — and at the end of each act.

Capriccio has no chorus but the ensembles were enjoyable: the octet was exciting and the servants’ number near the end was very amusing. A special mention too for the string playing from the sextet on stage in the opening scene.

Conductor Douglas Boyd was on fine form, creating a true synthesis between the singers and players throughout.