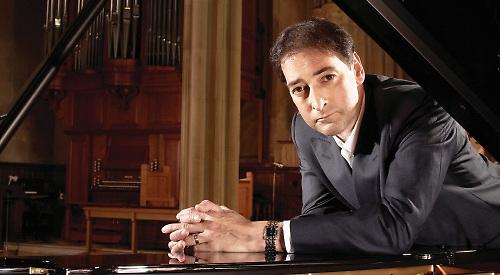 THE impressionist Alistair McGowan is renowned as a man of many talents — comedian, actor, singer and writer.

But now his fans can add another accomplishment to the list: classical pianist.

Last September saw him release a CD, The Piano Album, that topped the classical charts.

Now he is taking the album on tour with a stage show — Alistair McGowan: Introductions to Classical Piano — that promises to combine his various talents.

Next Saturday (August 11) at 8pm he is playing the Courtyard Theatre at Norden Farm Centre for the Arts in Maidenhead.

Now 53, Alistair reignited his passion for the piano in his late 40s, having previously not played since he was a young boy.

His reason for doing so was that he wanted to learn to play some of his favourite music — an initiative that led him to record his album just three years later.

Looking ahead to next Saturday’s recital, Alistair said: “I’d be delighted if, as well as fans of classical music, we were able to encourage people who may not know much about classical piano to come and enjoy some of the incredible music written — and still being written — for the piano.

“As well as having the chance to share my own versions of the stories of composers and the extraordinary music they write, I simply can’t have a room full of people and not have some fun with my current favourite impressions too.

“It should be the first show in which you can hear Harry Kane alongside the music of George Gershwin and Jacob Rees-Mogg between pieces by Edvard Grieg.

“As well as being light-hearted, I hope these shows introduce people to some wonderfully romantic music and demonstrate to anyone who harbours a secret ambition to take up music, that it really is never too late!”

Does Alistair find that his keen ear as an impressionist comes in handy on the musical front?

“One of the most important things in music is getting the rhythm of a piece right, so listening to records of it being played by people more accomplished than me — I can listen to what I have to achieve in the same way as learning an impression.

“Although, on the downside, in comedy it is very much finding your own rhythm, so I have to be a little more disciplined with piano playing.”

Has he received any top tips?

“One of the pieces of advice my piano teacher has given me is to listen to music with your fingers.”

What is he hoping the audience will take away with them?

“There are many lovely composers for the piano that not many people have heard about and I would love to change that.”

He added: “There may be the occasional laugh, but this is me trying my best to play classical piano, not emulate Victor Borge or Les Dawson.”