Review: An Evening With Vince Hill 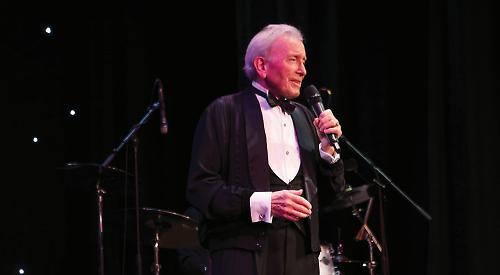 AFTER a lifetime in show business, the curtain finally came down on the career of Vince Hill at the Kenton Theatre last Saturday.

Previous attempts to retire failed when further invitations proved just too tempting. Vince is a man who doesn’t like to say no but, he assured the audience, tonight was definitely the last time he would take to the stage.

An Evening with Vince Hill was probably destined to be a hit with the theatre packed with music lovers and residents who have known Vince throughout the 35 years he has lived in the area.

The packed theatre saw him interviewed by Henley Literary Festival director Jon Ryan. Vince spoke of his early life, singing in a pub in Margate as a teenager before driving a truck, working in a bakery and going down the mines before joining the Royal Corps of Signals.

After his national service he went on to work with the Teddy Foster Band before joining pop band The Raindrops and going on to perform on TV and radio.

His solo career took off with his first hit, Take Me To Your Heart Again. Several more followed before he recorded the song that was to become his signature tune, Edelweiss.

Vince told how the recording came about. The song, from the soundtrack of the musical The Sound of Music, had been a hit in Ireland and he was regularly asked to sing it at performances.

Eventually his agent thought it was the right time, so Vince crossed the most famous pedestrian crossing in the world and recorded Edelweiss at the Abbey Road studios made famous by the Beatles. He cut the track in just one take.

The week after the record was released he took a call from his producer and was told to sit down. He expected just a couple of hundred had been sold but was stunned when the figure was 126,000.

There was a brief mention of his battle with leukaemia, which is now under control, and his admiration of the hospital staff who treated him.

Vince, 84, told of working with a host of showbiz names. There were encounters with Gladys Knight and the Pips, Cleo Laine, Marian Montgomery, Kathy Kirby, Dionne Warwick, Sacha Distel and many others.

He also performed on a cruise ship with the great American comedian George Burns, who gave him these words of advice. “If you can fake sincerity,” he said, “you’ve got it made.” Vince also had a royal fan. He told of performing at a number of private parties where Princess Margaret was in attendance. She always asked Vince to sing her favourite number, You’re the Top.

The second half of the show saw what most of the audience wanted — Vince performing many of his hits.

Backed by the impressive Ken McCarthy Trio, he effortlessly went through his many hits including Look Around (And You’ll Find Me There), Roses of Picardy and, of course, Edelweiss.

The songs flowed in an effortless fashion before Vince was joined on stage by a friend from many years back, the singer Anita Harris, who had chart success in the Sixties and appeared in Carry On films.

Despite both outrageously flirting with each other, they performed a charming and fun-filled version of Smile While Your Heart is Breaking.

There was a surprise for Vince when he was told by compère Mark Andrews, who gave his time free of charge, that a great friend of his was in the audience.

The comedian Duncan “Chase Me” Norvelle, who had recently been performing with Vince on a cruise ship, joined him on stage. They both entertained the audience with impressions of Sylvester Stallone and Marlon Brando.

Another surprise was when Henley’s mayor Cllr Glen Lambert and his wife Anna the mayoress appeared from the wings, presented Vince with a bouquet of flowers, kindly donated by Brambles Florist of Sonning Common, and thanked him for the many years of pleasure he had brought to so many.

As the show neared its end the performance took on a notably personal note. Saturday marked the death exactly two years earlier of the love of Vince’s life, his wife Annie. “That one was for you, Mrs Hill,” he said after singing her favourite song, I’ll Be Seeing You.

Another poignant moment in the show was Vince’s performance of If I Never Sing Another Song, which included the lines “I’ve had my share of fame, you know my name.”

That produced the third standing ovation.

Throughout, Vince’s powerful yet sensitive voice and his excellent phrasing and timing never faltered — except for a few personally emotional moments. And who wouldn’t forgive him for that?

The audience loved Henley’s favourite celebrity and, at the end, rose to their feet in unison once again to bid his career a fond farewell.

This guy’s a legend with style — it was a stunning performance, the like of which we shall never see again.

• A percentage of the money raised from the sale of tickets — totalling £1,528.50 — will go to the Leuka charity, which specialises in treating leukaemia, and Sue Ryder at Nettlebed, which cared for Vince’s wife Annie in her final days.