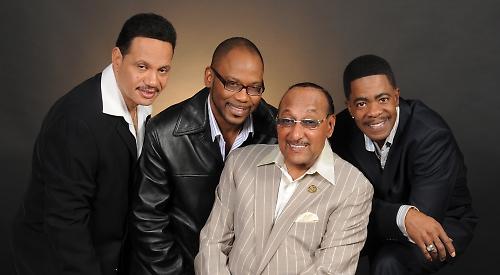 WHEN four high school boys in Fifties Detroit wanted to impress the local girls at one of their parties, they knew that showing off their sporting prowess wasn’t going to work.

Instead they decided to try the close-harmony singing that they knew from being in church choirs as well as their high school choir.

Both they and the partygoers enjoyed the sound and the boys decided to carry on rehearsing together.

After an enjoyable first gig at Eddie’s Lounge in Flint, Michigan, in the summer of 1954 they decided to go professional with Benson and Fakir deciding not to take up basketball scholarships to college.

They had originally called themselves The Four Aims because they intended to aim high, but record producers wanted to avoid confusion with The Ames Brothers.

So the Four Tops came into being, and now some 65 years on from that high school party Duke Fakir is bringing the band’s current line-up to next weekend’s Rewind festival at Temple Island Meadows.

They will headline the main stage on the Saturday (August 17), with Grammy Award-winning singer-songwriter Michael Bolton headlining the Sunday (August 18).

Now aged 83, you might not expect Duke Fakir of the Four Tops to relish getting up on stage to entertain a bunch of Eighties music fans. But his love of singing and performing remains entirely undimmed by the passing years.

Recalling the high school party that started it all, he said: “I so enjoyed the feeling I got from that concert I turned around and said, you know, I’d rather do this than college — and the others agreed.

“We gave ourselves around nine years to get to the top and hoped it would be a career for 10 to 15 years. Sixty-five years later I am still going strong!”

They did indeed get to the top in around nine years, when they were signed by Tamla Motown and went on to perform a series hit songs written by the partnership of Holland, Dozier and Holland, together with the occasional cover version they sneaked in.

But how did Duke first discover his talent for music? “My mother was central to my singing at an early stage. She and my aunt were pastors at our church, and Mum had responsibility for the choirs, the ‘baby choir’, junior choir and senior choir — I sang in all of them, as did my siblings and cousins.”

As for how he has kept his high tenor voice in perfect condition all these years, it seems that practice really does make perfect.

“I just keep singing all the time! There was only one year I didn’t sing — in my mid-teens when my voice broke. The man in charge of the choir sent me home. I was crestfallen and in tears — it was just the same as for a sportsman being ‘benched’. I went home and told my Mum through the tears and she said calmly ‘Don’t worry, give it a year and you’ll be back there.’

“She was right. I became the number two first tenor in the choir at Pershing High School. Many years later I was passing the Metropolitan Opera in New York when we were performing there and saw the name of one of the soloists in the opera there. It was the guy who was always better than me. We met up for a chat and had a laugh over old times.”

Duke’s mother was one of his musical inspirations, along with a wide variety of singers including Barbra Streisand, Rosemary Clooney and Nancy Wilson, but was his father also musical?

“My surname Fakir comes from him, and what he used to do, he was born in the East Indies — what is now Bangladesh. He was a fakir — he used to make sitars and stand on street corners playing them and singing. He raised enough money to come from England and then on to Canada with his singing and playing.

“Eventually, living in Canada across the Lake Michigan from Detroit, he swam the lake to get here. When I was young, he was always working hard in the factory, so had little time for music.”

Well that is the past generations, but what of the current and beyond? Sadly, three of the original Four Tops have passed away, but one of the current members is the son of Lawrence Payton.

Do any of Dukes family share his love of and skill for music? “Two were musical but chose not to go into it,” he says. “One of my sons is a sound engineer and looks just like I did at his age. I was hopeful he would be able to take over from me when the time came. Sadly, the only way he could carry a tune would be in a paper bag!”

Speaking of the current line-up, what can Rewind festivalgoers look forward to?

“New songs!” laughs Duke. “Well, not really, but we will do some cover versions of other people’s songs like we have always enjoyed doing.

“There will be all the old favourites, but I enjoy singing those songs. The most important thing for me is we have not sung them to that audience before and so they have never reacted.

“That to me is what makes every concert and every time I sing a song special, because the reaction of the audience makes it different because it is never quite the same each concert.”

Some tickets for Rewind are still available at the time of going to press. For more information and to book, visit www.rewindfestival.com