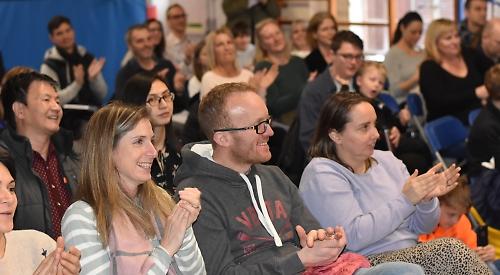 The day was split into two 90-minute shows in the main hall, watched by parents.

The concerts are designed to give young children the chance to perform in a relaxed environment and have been part of the festival since it started 27 years ago.

There were several group and individual performances by children from Henley Music School.

Henley Music School Windies played Can Can by Offenbach, while the Mini Choir sang Grandma, Grandma. School founder Laura Reineke said: “They rehearse once a month and they have been practising since January. We like to have a performance once a term and the proms is always our spring performance. I thought it was brilliant, a really lovely event.

“The festival is not only a performance platform but there are also all these wonderful workshops for schoolchildren. It expands education outreach and the kids get to do interesting things they wouldn’t be able to do otherwise.”

It was the first time he has played live and he was watched by his parents, Hannah and Steve, and brother Joshua, eight.

Charlie said: “I was nervous throughout the whole song but when everyone clapped at the end it felt really amazing. I heard people wooing.”

Mrs Ward said: “We are very proud of him and pleased he didn’t let his nerves get the better of him.” Brother and sister Isaac and Ruby Urch, from Binfield Heath, both performed solos.

Guitarist Isaac, nine, sang as he covered Hey Now by London Grammar, while seven-year-old Ruby played Allegro on the violin.

The siblings, who attend Shiplake Primary School, had both performed at the youth festival before.

Isaac said: “I have been playing the guitar for two years and I just love it. It felt really good because I have spent a lot of time practising.”

Sacred Heart primary student Jan Karpowicz, who lives in Henley, played clarinet in front of his parents Jadwiga and Zbigniew.

His mother said: “This is the second time he has taken part in the festival. We think it is very important for him to enjoy music. It helps children to develop social skills and confidence.

“I think having a love of music will serve him well in life and he makes me feel very proud.”

His mother Yana said: “I am a very proud parent. This is the first time Mark has done the festival but hopefully he will want to come back next year.

“Music is very important and the younger they start the better.

“This is such a fun event because it gives the parents a chance to see their children perform.”

Lara Rawlings, from the London College of Music, was invited to take notes on the acts and offer them feedback.

Alfie Hay, from Bix, who is one of the founders of the festival, hosted the event and introduced the acts.

He reminded parents that the current co-chairs, Jo Dickson and Kate Swinburne-Johnson, were standing down after this year’s festival and stressed that more volunteers were needed to help run the event next year or it might not take place.

The next event of this year’s festival is HYF Unplugged, which takes place at the Kenton Theatre tonight (Friday) at 7pm.