Aspiring rock stars get youth festival off to good start 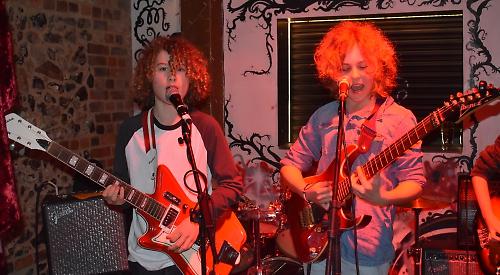 YOUNG musicians entertained their families and friends at the first event of this year’s Henley Youth Festival.

More than 20 children performed at Gig Night, which was held at Magoos bar in Hart Street on Saturday night.

The solo performers and bands included several pupils from Gillotts School in Henley and Highdown School in Emmer Green.

The Wires, a group of friends from Gillotts, were making their live debut. Felix Richardson and Joe Archibold shared singing and guitar duties, while Ela Chamberlain was on drums and Jess Robinson played bass.

The band formed in December and have been practising in their spare time after school. They played covers of Seven Nation Army by The White Stripes and Song 2 by Blur.

Whenever they sang “from the Queen of England” they told the audience to shout “to the hounds of hell”.

Felix, 12, of Deanfield Avenue, Henley, said: “At first I was really nervous, but once we got through the first song I was fine. This is a great thing that Henley Youth Festival does and I hope it carries on.” Felix won the inaugural Henley’s Got Talent competition in 2018 and played with his sister Didi at the Henley Living Advent Calendar.

His father Matt said: “When Felix went to Gillotts he was keen to put together a band. He knew Jess because she played with Felix and Didi before Christmas. They have really come on in the last two or three months and I love seeing Felix on stage having fun.”

The band, who have only been together for three months, performed Miss You by the Rolling Stones and Shape of You by Ed Sheeran.

Lola, 14, said: “We all love music and we know each other through school. This is the first time we have done the youth festival but we are all keen to do music as a career. I think we all started off feeling nervous but by the end it was more comfortable.”

Josie, 18, of Hemdean Road, Caversham, played covers of I Miss You by Blink 182, The Middle by Jimmy Eat World, Naïve by The Kooks and Underdog by You Meet at 6.

She said: “There are songs in there that I love and am passionate about but also ones that I hope other people will enjoy.

“I loved it — I thought it was very smooth and everyone seemed to be enjoying it. I would love to come back if they will have me.”

He said: “This is one of the first things I have done. It was a lot better than I expected.”

Kerry Fretwell, who has been running Gig Night for six years, said: “This year there seems to have been more bands and younger children taking part, which is good to see.”