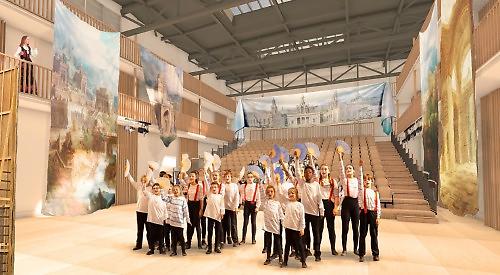 A NEW £14 million rehearsal centre for Garsington Opera has been given the go-ahead.

The four-storey building will be constructed at the Wormsley Estate, where the company has been based since 2011.

The estate, which is the home of the Getty family, is south of the M40 near Christmas Common and in the Chilterns Area of Outstanding Natural Beauty.

The centre will provide not only rehearsal facilities for the company but also allow it to extend its community outreach programme, particularly in schools.  It will also have coaching, administration, catering, workshop and storage spaces.

Construction work is due to start next year, subject to fundraising, and be completed in 2023.

The plans, which were supported by schools, the Chiltern Society, the Buckinghamshire Cultural Partnership and the Chilterns Conservation Board, were approved by Buckinghamshire Council, the planning authority. Nicola Creed, executive director for Garsington Opera, said: “We are delighted to have secured planning permission.

“The integrated venue will produce a host of operational
benefits which will enable us to create productions of outstanding artistic quality.

“This is really important given the loss of rehearsal space elsewhere. We intend to use the facility for opera rehearsals for four months each year and the remainder of the year it will be available for the local community and for commercial hire.

“It will be the home for Garsington Opera’s dynamic outreach programme, working with schools, local children and adults, hospital patients and many others and for local performing arts clubs. Our next challenge is the fundraising but we aim to be open in 2023.”

The building work will involve the demolition of some redundant farm buildings but the existing farmhouse and cottage will be retained.

The design team was led by architects Nichols Brown Webber, who are based in nearby Northend.

Partner Andy Nichols said: “We knew from our previous work that a building of this size would require a sensitive design, not least due to its location on a stunning site next to ancient woodland.

“The new centre will extend to nearly 4,000 sq m and will be constructed of brick and flint walls with a plain tiled roof, an oak structure and traditional weatherboarding.

“The larger spaces will be covered by a green roof with chalk-loving plants similar to the surrounding fields.

“The project includes the refurbishment of existing cottages, landscaping and ecological enhancements. We were determined to make a building that is green from every point of view. There are quite a few ecological measures like bird boxes, bat boxes and new planting of indigenous species.”

The weight of the green roof would help soundproof the space below.

Mr Nichols added: “Normally in the AONB you wouldn’t be able to get a building of this size but by making the community case and with Garsington Opera being very well thought of in the local area it was a very good story all round for everybody.

“We’re very happy with the building. I can’t wait until it’s open.”

Garsington Opera was founded in 1989 and has established an international reputation for the high quality of its six-week summer festival. Following its move to Wormsley, operatic and other performances take place in an award-winning auditorium.