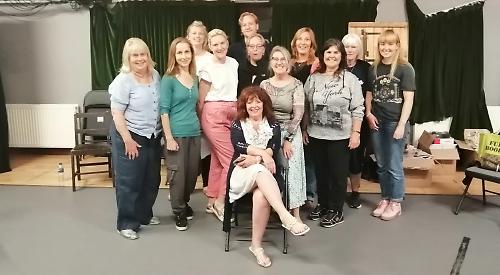 MEMBERS of Henley Amateur Operatic and Dramatic Society are returning to the stage this month with a new drama about the ups and downs of a community choir.

Sing From the Heart by Mike Rowbottom is billed as a play with music rather than a musical.

It opens at the HAODS Studio next door to the Kenton Theatre in New Street on Thursday, September 30 at 7.30pm.

With a cabaret-style seating capacity of around 70, there are two further evening performances on Friday and Saturday, October 1 and 2, also at 7.30pm.

Directed by Julie Huntington, the play tells the story of Phyllis, a nearly retired history teacher who actually wanted to be a musician.

She has always found music a great release, so she starts up a community choir that anyone can sign up for.

It’s somewhere people can go just to sing their hearts out, leave their everyday troubles behind and feel part of something bigger than themselves.

But soon Phyllis’s ambitions for the choir begin to grow — and that’s when the troubles start.

“I started writing it three years ago,” says Mike, who has previously had work produced by the Henley Players.

“I was really enthused by the idea of getting a group of people together in circumstances where they might not otherwise gather.

“It seemed to me that with singing, like most hobbies and pastimes, you attract different kinds of people from different backgrounds because they share that enthusiasm.

“But it might be the only thing they do share. Their politics might be very different, their attitudes to life, their domestic backgrounds — they could all be violently different.

“These things have to be considered when you put people into the same melting pot — and that’s what I wanted to explore.

“And I wanted to do it with music because I like playing with music.”

Mike, who lives in Stoke Row, is a retired journalist who for many years worked as a news reporter and producer with ITV Central.

In the Henley area he is also known as the front man of classic rock band Crossfire Hurricanes and has recently started another Rolling Stones-related project.

A singer-songwriter in his own right, in 2017 he released a Christmas charity CD in aid of the Thames Valley branch of Muscular Dystrophy UK.

When it came to choosing the music that would feature in Sing From the Heart, Mike decided that a poppier tone would be appropriate.

He says: “I was going to do it using lots of established songs because that’s what a pop choir would do.

“But then it occurred to me that the bureaucratic minefield I would have to go through to get the permissions, and whatever payments we were going to have to make, made it impossible.

“So I thought, well, I’ll write them then. And apart from one song which was written by a friend of mine, because I’ve always wanted that particular song to have a wider audience, all the music is mine.”

Along with his friend Tony Sadler’s song Invisible, Mike has composed six original numbers that make up the soundtrack to Sing From the Heart.

“I’ve tried to write uplifting songs because that’s what pop choirs do,” he says. “They pick cheerful songs where everybody can pile in and you get this wonderful, joyful experience from it. Well, that’s the kind of choir that I wanted to create with this play.

“There were three more songs that I had actually put in it but when Julie and I came to look at it we thought, ‘Oh no, there are way too many,’ because it was going to get in the way of the drama.”

Julie’s involvement in the project began during lockdown last year when Mike asked her to read one of the parts for a five-minute audio excerpt that was subsequently broadcast on BBC Radio Oxford.

She recalls: “Mike said, ‘I’d really quite like to get this produced in full and what do you think?’ I read it and I said, ‘Yes, why not?’

“Because we’re looking for more things to do in the HAODS Studio, turning it more into a performance space rather than just a rehearsal studio. We want people to know it’s there.

“We do our February dinner theatre there but we’re looking to do perhaps two more shows in between and this is the sort of thing where, involving the community and with local people doing it, I thought let’s have a go.”

Following the first easing of the winter lockdown at the end of February, Mike and Julie’s first step was to meet up for a chat on the towpath at Phyllis Court Club, close to the food and drink kiosk.

“We had a couple of script conferences,” says Julie. “We workshopped through it and edited bits out.

“And then we had a eureka moment. There was just a chance statement, something Mike said, and I went, ‘No, let’s do this … oh my, yes, that’s it!’ It was a eureka moment with part of the plot.”

“But we can’t possibly tell you what that is,” laughs Mike. “We had coffee and burgers from the kiosk and we just sat on the side of the river for a couple of hours nattering about it. It was really great fun.”

Julie doesn’t want to give away any spoilers either, but she is happy to confirm that with a cast of 11 HAODS regulars on board, the twice-weekly rehearsals have been progressing nicely.

“I have to say that the finale song Step into the Light brought tears to my eyes,” she says. “I was really welling up because it’s so beautiful and so significant — and Mike didn’t even realise that the words would be that significant because the script change hadn’t happened when he wrote those words.”

Mike says that while he remains on call should any tweaks or rewrites be needed, he is delighted to have been able to hand creative control of the project over to Julie.

He says: “There’s no point handing over to a director if you’re going to come along to rehearsals and get in the way.

“I asked Julie to do it because she’s a really good director. Her track record is remarkable — you only have to look at her list of awards to see that.

“I’ve worked with Julie since 2004 when we were in a Henley Players production of The Playboy of the Western World together.

“At the time she was not only playing a major role but also directing something else and I became aware of her talent.

“So much so that when I was first-time directing my own play The Queen is Dead two years later, I asked her to take over for the last two weeks because I knew she’d make a better job of it than me.”

Tickets for Sing From the Heart cost £12, with a £2 discount for HAODS members.

For more information and to book, call the Kenton Theatre box office on (01491) 525050 or visit www.kentontheatre.co.uk