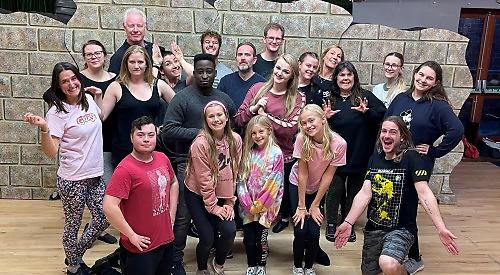 HAODS has brought a family favourite to the Kenton stage.

The award-winning Shrek The Musical spins off from the film and brings to life a whole raft of fairy tale and fictional characters, enthusiastically played by a cast of 22.

Colourful costumes by Julie Huntington immediately signal that this is quality festive entertainment.

Accomplished direction from Jake Turnell-Willett makes the most of the many talents of the leads and the ensemble.

There’s live music from the swamp musicians and high class singing, under the musical direction of Jane Southern. Stylish dancing and plenty of jokes add up to a good time for the audience.

Eye-catching scenery transports us to Shrek’s swamp and the Kingdom of Duloc and HAODS prove their green credentials by reusing a set from another production. David Riley’s lighting and sound give added atmosphere.

Full credit goes to the lead actors. Charlie Thomas as Shrek commands a brilliant singing voice and brings a laconic air to his portrayal of the ogre with a heart. Jerome Ifill is charismatic and exuberant as the talking donkey.

Together, this odd couple set out on a quest to fulfil several fairy tale conventions — free the princess, encounter the dragon and put wrongs to right.

Nathan Bristow really plays it for laughs as Lord Farquaad, the tiny tyrant of Duloc who sets his sights on Princess Fiona in order to achieve his own ambitions.

Kim Leyendeckers is strong and funny as the princess who wins the love of her unlikely hero, Shrek.

A special mention for Holly Maxwell as the young princess (and Baby Bear). Surely a star in the making?

With so many jazzy anthems and soulful ballads, there is plenty of opportunity for the audience to enjoy the wonderful voices of the cast, including Becky Staunton as the dragon.

Who wouldn’t be delighted by the spectacular set-piece song and dance numbers, such as “What’s up Duloc?”, performed by Bristow and the ensemble?

Amongst all the kooky jollity, there is a meaningful message about diversity and acceptance: it takes all sorts to make a community and everyone has their part to play proudly.

The power of the people is reinforced when the fairy tale characters rise up, united, in the face of injustice.

This is an upbeat bundle of fun, a real crowd-pleaser, with plenty of razzamatazz. Go and get tickets before they sell out.