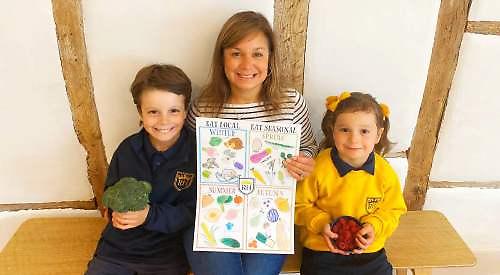 CHILDREN at Rupert House School in Henley are supporting the town’s food bank during the coronavirus crisis.

The year 2 pupils and their families have donated a range of items while those in year 6 have been working on a project focusing on what they eat.

The children have been growing their own food, studying seasonal food and food waste and trialling meat-free Mondays.

From this, they have produced a calendar with artwork from the entire school to reflect the different seasons and these are being sold to raise money for Nomad, the charity which runs the food bank from the d:two centre in Upper Market Place.

The parents of year 2 children gathered items across two weeks and donated 24 bags with an assortment of books, baking supplies and colouring pencils.

Camilla Hudson, whose seven-year-old daughter, Arabella, is in year 2, had already organised a collection of food items before the lockdown in March.

She said: “The children have been learning about superheroes as part of one of their projects at school, albeit remotely, so they have been doing a lot of imaginative work and talking about the superheroes in their own lives.

“We have been thinking about the key workers and on the back of that we thought we should take it a step further and show that we can do a little bit as well and that is where the inspiration came from. We wanted to show the children that they could make a difference.”

The colourful bags were filled with activities to entertain children during the lockdown, such as cookie-making kits, packets of seeds and bubble makers as well as books.

The bags were sorted into different age categories before being dropped off at Nomad at a safe distance.

Mrs Hudson, who lives in Henley with her husband, Ben, and their other daughter, Hettie, three, said: “Nomad has always been close to my heart and it is a cause we have supported at the school as well.

“I appreciate that even in very affluent areas there are people who are struggling.

“The school has always had a relationship with Nomad at harvest festival time doing food boxes for them.

“When we did the initial food collection, everyone was panic buying and stockpiling and I thought we should take a step back and think about helping the community. It was a horrible time and we didn’t quite know what was going to happen and it was very short notice.

“We had two days to collect stuff but we managed to fill two car boots with food and we asked Nomad what items they needed most.”

For the most recent collection, some parents placed orders online to be delivered to Mrs Hudson’s home. She was able to get some of the activity books at a reduced rate through her job at Osbourne Books, where she is an independent organiser.

Mrs Hudson said: “I was happy to be the hub and have stuff dropped off at my door or delivered here directly.

“It is about people coming together and helping the community. It isn’t about patting ourselves on the back but showing our children that we can help other people who have very little or no income.

“It’s also constructive use of their time. With the baking kits, we thought about doing our own jars with all the ingredients, but we couldn’t do anything that would risk contamination.

“The cookie kits we put in just need water to make them and it is a lovely activity to do together as a family. Arabella is much more aware of people being in different circumstances. She is aware that she is in a fortunate position and wants to help others.”

Fleur Wells, who is a science teacher at Rupert House,
co-ordinated the year 6 food project as part of the Henley School’s Environmental Science Competition, which is run by Greener Henley. Entries are being submitted virtually this year due to the pandemic.

Children have been growing their own food at the school since spring thanks to a donation of seeds and equipment by Toad Hall Garden Centre.

Mrs Wells, who lives in Tuns Lane with her husband, George, and children Luca, nine, and Jemima, six, said: “My children wanted to do a project on sustainable eating.

“Now they are back in school and growing their own food. They are quite a lively year group and last year we did air quality and single-use plastic. It has been a really good topic.

“Just before we shut the school in March, we had a competition involving all the children to draw their favourite fruit or vegetable from the UK and we had an assembly about eating local produce.

“Even with the lockdown, we haven’t slowed down. We have kept up the momentum and now the children are gathering their individual pieces of work together for the competition.”

They have had 100 calendars printed and these are being sold for £2.50 each. Mrs Wells added: “We had many more drawings than there was space for and we tried to make sure we had pictures to reflect each age group, from nursery to year 6.

“The children have been really engaged with the project. Year 6 encouraged everyone to do it for their homework and collected the entries in reception.

“They have done a lot of research and can talk very eloquently about reducing food mileage. They read food labels very carefully as well.”

Mrs Wells added: “In my eyes, the people who are going to be hit the hardest at this time are young families. It is such an uncertain time and it is really good that the food bank is there for parents.

“It is a really important charity to support when the demand is that much greater at the moment.”

Tim Prior, Nomad’s youth and families team manager, said: “The bags were really lovely. We were saying how well they were put together.

“We have added them to the food parcels and delivered them to the families we have been supporting. It is nice to have some positive activities for the kids to do during lockdown and it is a really thoughtful idea.

“The school has been really supportive, as have so many people in the community. A lot of people have stepped up.”