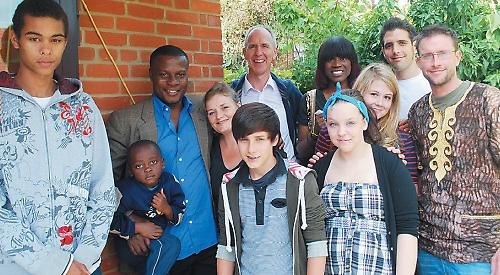 THE origins of Nomad youth & community project are humble and perhaps even surprising for a beautiful English market town like Henley.

Twenty-five years ago this month, a think tank involving the town council, churches and the old youth centre came together after some unsavoury incidents of antisocial behaviour made the national press.

One man, Gabbi Enharoe, volunteered to be the solution. He was the minster at Henley Baptist Church and became Nomad’s solitary detached youth worker for the next four years.

He would spend his time on the streets, trying to help young people overcome their problems.

Exactly a quarter of a century later, during which the charity has made 90,000 interventions, its core work remain much the same.

This includes working in schools and providing parenting and family support and after-school activities.

Nomad is now run by Sue Prior, who joined in 2000 and is now funding co-ordinator, and her son Tim, 41, the youth and families team manager. It also has two support workers.

It is based at the d:two centre in Upper Market Place next to the Baptist church and in the past year particularly has become known as the home of the Henley food bank.

Last year, the bank delivered 1,300 food parcels — more than 3,000 bags of food — to families and individuals in need during the coronavirus pandemic compared with just over 400 parcels during the previous year.

Mr Prior, who lives in Bracknell, said: “I would be reluctant to say it has been our most important year but it has certainly been a very unusual one. Much of the normal work we do ground to a halt.

“We’ve been inundated with offers of support from the community, which has been amazing to see. We took over the room next door to the food bank storage room as it is about four times the size and it was absolutely rammed.

“Before March last year, we were typically delivering 20 to 30 food parcels a month and by the time we got to July, we were delivering more than 200.

“We saw Henley at its best in terms of the response and people were looking out for one another.

“About £60,000 worth of food was donated and we also had financial donations to provide food vouchers. We actually had to turn volunteers away because we had such a fantastic response.”

Nomad has also managed to do some of its normal work during the lockdowns with online mentoring and one-to-one support for families.

Mr Prior said: “Henley is a wealthy area and we don’t exclusively work with low-income families.

“We’ve seen that this year with the food bank and we’ve supported families, young and old, from across the whole community.

“We’ve had a lot of people contacting us and some people have almost been ashamed. Just because you’ve got money doesn’t mean you don’t have relationship issues. There was a misconception at one point that we will only work with naughty teenagers, which is incorrect.”

Meanwhile, Mrs Prior is planning to leave Nomad after 21 years and move to the coast.

But she will not sever all links and hopes Nomad will use her new home for the away trips it runs for youngsters.

She said: “It’s never easy making a transition or stepping back from something but I’m leaving the project in safe hands. I will still be looking to retain those links and what drives me won’t go away overnight.

“I feel Nomad is in a good place now. Being able to leave, knowing it is going to do well, is amazing.

“We’re told that the service is still wanted and we keep getting referrals, so the need is still there. It is a real team effort and the chemistry is part of that success.

“Just to think we have played a small part in helping others is a privilege.”

Mrs Prior was born in Henley and lived here until was 11. She returned with her husband Dave in 1997.

Mr Prior was invited to manage the d:two centre, formerly known as Dayspring, and his wife became a community worker three years later.

The centre building required considerable repair and Mr Prior helped to oversee the refurbishment.

He continued to provide support to his wife when she took over the management of Nomad, acting as treasurer and secretary to the trustees.

When Tim, the youngest of the couple’s sons, joined as a youth and family worker in 2009, his father remained in the background of many community events. He took over as project manager from his mother three years later.

Mr Prior snr was diagnosed with non-Hodgkin’s lymphoma in September 2017 and died in August 2018, aged 74.

Mrs Prior said: “He played a huge part and I probably couldn’t have done half of what I did without him behind me in the early years.

“If we wanted to do something like a fun day, he would always be there putting up the gazebos. He let me run with Nomad and was very much in the background. I am grateful to have still had Nomad over the last three years as it has been helpful in terms of the process of getting over the loss.”

She has also enjoyed working with her son.

“To begin with, it was strange,” said Mrs Prior. “I wasn’t sure whether to sign my emails off as ‘Sue’ or ‘Mum’.

“I’m extremely proud of Tim and what he is doing and I know Nomad is in good hands.”

When Mrs Prior joined Nomad, she was on her own for the first few months and then shared the work with James McFarland, a former teacher at Gillotts School, for seven years.

They agreed it was important to establish activities for young people and started holding football sessions twice a week.

Mrs Prior said: “There are lots of things available to young people in Henley and there was then but a lot of the kids had been thrown out of clubs because of their behaviour, or because they couldn’t afford to access them.”

Through this and other initiatives, such as beach trips, paintball and mountain biking, friendships were made and important life lessons were learned.

In 2005 Nomad gained its own charitable status.

Mrs Prior explained: “As we started to develop, we had to look at funding and we were beginning to explore different ways of engaging with young people.

“Things began to evolve, our capacity was growing and that required more funding. We have to work very hard and fundraising is very important.

“Government money comes and goes so we try not to get tied up with that.”

By 2008, the charity had gained enough recognition to be tasked with running a children’s centre along with a similar scheme in Sonning Common.

It was around this time that Mr Prior joined as the project lead for Henley while the church building and the house next door were merged, with Nomad renting out the top floor for office space, meeting rooms and activities.

When the tender for the children’s centre went out again four years later, Nomad lost out to Action for Children, a national charity.

However, this too came to an end in 2012 when Oxforshire County Council was making
millions of pounds in cuts. The old children’s centre is now called a family centre and is run by d:two and the church.

In 2009, Mrs Prior received the Henley town medal and an Oxfordshire High Sheriff’s award but she says it gives her more joy to help families in need.

She said: “I love seeing people who have struggled for whatever reason emerging from that and moving on with their life. Sometimes it is only small movement but that is still worth it.

“One of the important things for me is my faith. It is key in what I do. I believe God loves me and that love flows out to others.

“I believe there’s good in everyone and that everybody has value. I think it motivates me but I don’t push religion down people’s throats. We are based at the church but we are separate.”

Residential trips away evolved from Nomad’s work with schoolchildren.

A mentoring programme, which helps about 30 children every week, is run with Gillotts School and Langtree School in Woodcote.

At the end of each school year, the charity identifies a group of students that would benefit from the experience of travelling abroad and taking on a challenge. Trips have run successfully for more than 15 years, including to Poland in 2004 and Malawi in 2010 as well as Mount Snowdon in 2019.

Mr Prior said the young people were referred for “all sorts of issues”.

“It could be that they have problems at home, substance misuse, or ttendance and even relationship issues,” he said.

“The benefits of these residentials are enormous. They’re not always easy but when you see someone who is scared of heights climbing a mountain when they’re absolutely petrified it is so rewarding. They might be quite a tough street kid but in that situation, when they’re feeling a bit vulnerable, it is a fantastic experience.”

Nomad also helps young people who have left school at 16.

Mr Prior said: “If they’ve struggled in school, they are likely to have issues making the transition to college, so we do a lot of support work for that age group up to 25.

“We help them with employment, housing, budgeting and all those independent living skills.” Nomad also works with parents. Support workers meet with children and parents separately before bringing them together.

Mrs Prior said: “There may be anger at home or communication problems and we help them through these issues.

“We do parenting support but it stretches beyond that sometimes because you realise there are other issues, such as housing or money, which are often linked. We can support or signpost.

“If you are on a low income here, you are doubly disadvantaged because the difference between the haves and have-nots is huge.”

Mr Prior added: “Our doors are open to anyone that would like support and we try our best to help. You don’t always get the breakthrough but it is lovely to see people moving on.”