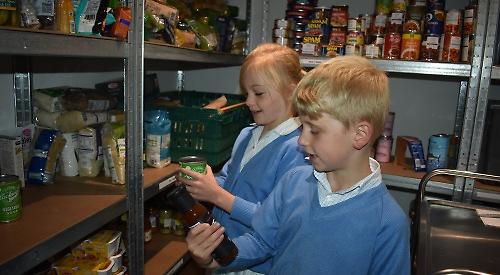 CHILDREN helped deliver a large load of donations to the Henley food bank.

The year 3 pupils from St Mary’s School in St Andrew’s Road arrived at the d:two centre in Market Place in two minibuses loaded with about 30 bags.

The bags were filled with tins and jars of food as well as toilet paper, which had all been donated by parents of children at the independent school. The pupils carried them up the stairs to the food bank store in pairs.

The donated items will go into food parcels which will be delivered to more than 200 residents in the Henley area in the run-up to Christmas.

Staff from Nomad, the charity which runs the food bank, showed the children what typically goes into a parcel, including chocolate croissants, cornflakes, tea bags, baked beans, jam and laundry detergent.

They said the more donations it receives, the more generous it could be with the food parcels.

The children said they understood that Christmas could be the hardest time of year for those less fortunate than themselves.