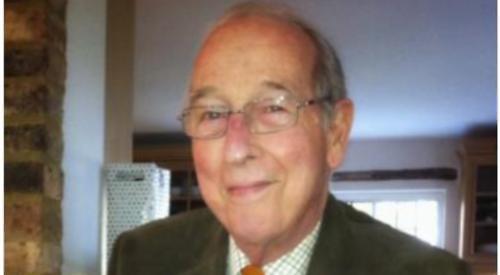 DERRICK HESTER was born in Sumatra in 1926.

His father Ray had been wounded during the First World War and had to move to a warmer climate to allow his wounds to heal, so he and his wife Mildred went to Indonesia where he worked as a rubber planter.

The family returned to England when Derrick was six so he could go to school.

His mother died shortly afterwards and he was brought up by his father and grandparents in Thame and Princes Risborough. He went to Lord William’s School in Thame from 1935 to 1942.

Derrick was always keen on agriculture and after school he enjoyed a year of practical training at Bishopstone Farm in Aylesbury before going to Reading University to study agriculture.

It was here that he met June Edwards, his future wife, at a dance. Their first dance together was to Glenn Miller’s In The Mood.

After graduating with a degree in March 1945, Derrick accepted an offer from Brooke Bond of a one-year tropical agriculture diploma at the Imperial College of Agriculture in Trinidad.

One of his early tasks was to manage a farm growing loofah sponges. It was a big change from his life in England and he enjoyed the warm climate and outdoor life — and the rum punches. There was a lot to get used to. He recalled one occasion when he complimented the chef on a chicken meal only to discover the meat was actually iguana.

When the course finished in 1947 he was posted to a tea estate in Tukuyu in Tanganyika (now called Tanzania).

After three years he was promoted to manager and then moved to Mufindi, where he managed the Kibwele tea estate.

Derek had corresponded with June since leaving the UK and when he proposed she went out to Africa to join him, arriving by ship in Mombasa in Kenya. They were married in the cathedral in Mombasa in August 1952 and went on to enjoy 67 years of marriage. They had two children, Carole, who was born in 1953, and Malcolm, who arrived in 1956.

Derrick worked his way up the company and became estates director and eventually chairman and managing director of Brooke Bond Tanzania, a large company that employed about 7,000 people.

During this period the company helped to improve the life of its employees, creating good housing for its workforce, a hospital, health clinics for each estate and a bank as well as providing clean water. Derrick was very proud of this achievement.

The company faced some interesting challenges after independence as it became impossible to get hold of basic goods, spare parts and equipment so keeping it running over the years was no mean achievement.

Home life was also challenging as even basic ingredients were unavailable or in short supply. The community had to become self-sufficient, producing almost all its own food. In his spare time, Derrick loved fly fishing and caught a prize rainbow trout that was commemorated with a display that still hangs in Mufindi. He also enjoyed playing tennis and was able to enjoy a good social life at the club.

In 1983 Derrick was awarded an OBE for outstanding services to the tea industry and his community work in the region.

In Mufindi June and Derrick helped the High Commission by looking after British people in the area and accommodating local dignitaries and officials when they were on business up country as Mufindi was 400 miles away from the capital. The couple even had a long discussion with the Queen at a garden party.

When Derrick retired in 1984 the local people arranged a party for him. They honoured him by making him a chief of the local Wahehe tribe and gave him traditional gifts to show their appreciation of his work.

Derrick and June then returned to England, first to Caversham and then Peppard Common, where they enjoyed their retirement.

Derrick was very involved with the community, being a parish councillor, beating the bounds of the parish and maintaining local footpaths.

He also looked after the older generation of the wider family and did a lot of volunteering in the local community. He loved working in his garden and listening to traditional jazz.

Ten years ago Derrick and June moved to a lovely retirement cottage at Lyefield Court in Emmer Green, where they enjoyed many happy days. Derrick is survived by his wife June, children Carole and Malcolm and grandson Oliver.